This excerpt is reprinted from Vodka is Vegan: A Manifesto for Better Living and Not Being an A**hole by Matt and Phil Letten © 2018 by arrangement with Tarcher Perigee, a member of Penguin Group (USA) LLC, a Penguin Random House Company.

What does the future hold for meatless eating?

We’re sure the future will have lots of pretty cool things. Like flying cars, and computer chips that you can install in your brain to record both every visual image and every bit of trivia, and clothes that are all shiny and formfitting to make people look like foiled-up baked potatoes (which are also vegan).

For the most part, the future sounds pretty amazing. But there will also be some significant challenges. Every day, the world makes more people, and every day, those people have fewer and fewer resources to share. The UN predicts that by 2050, Earth’s population will soar to almost 10 billion people.  So . . . what are all those people going to eat?!

One way to get a preview of what the future might bring is to see where the venture capitalists, the top companies, and the R& D people put their money. Money is always a reliable indicator.

Now obviously there are innovations happening all over food. From vertical farming vegetables to harvesting algae to 3-D printing of food to eating meals in pill form, there’s a lot of crazy shit going on out there. But the most import-ant innovations in food are in meat, or more to the point, replicating and/ or replacing it. Or, more basically, keeping the meat, but removing the animal.

Capitalism is vegan, people. The money is flowing in, and it’s not going toward new ways of shredding chickens and cows. 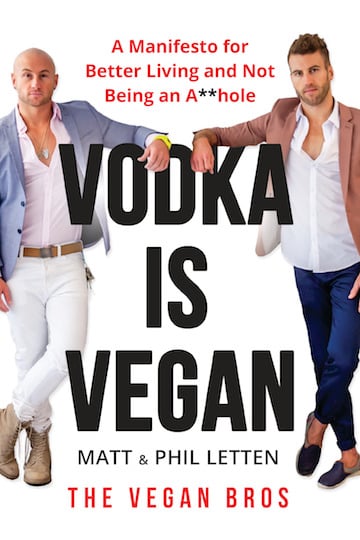 What can about $100 million in VC funding from investors like Google and Bill Gates get you in Silicon Valley? The next Facebook? The next Uber? Well, it might just buy you the next hamburger. Specifically, the perfect  plant-based burger, courtesy of California start-up Impossible Foods and their secret ingredient: heme.

Heme is the secret ingredient to a seriously delicious burger—and a burger made from 0 percent cow! The burger is made from wheat, coconut oil, and potatoes. And heme. Heme is an iron-containing, oxygen-  carrying compound that makes meat smell, sizzle, bleed, and taste amazing (the heme in cows is in the form of hemoglobin). Heme occurs in about ten parts per million in beef, and about two parts per million in chicken. But if you add some heme to chicken, it starts tasting like beef. So what if one could take that awesome magic compound and somehow add it to a burger made from plants? You get a burger that smells, tastes, and sizzles like meat!

The brainchild of Stanford chemistry professor Patrick W. Brown, Impossible Foods uses  cutting-edge technology to identify what makes food delicious and engineers that into their all-plant burger. They use a straight-from-CSI (or NCIS or any of the other forensic  procedurals—  they’re all pretty much the same) gas chromatograph mass spectrometer (CG-MS) to analyze the flavors and smells produced when grilling both traditional meat and  plant-  based meat in order to create anon-cow burger that is virtually indistinguishable from a classic beef burger. Except, you know, less ripping out of throats and fewer eviscerations.

Heme isn’t unique to animal flesh. Plants also have heme, and hemoglobin, and Impossible Foods found their ideal source of heme in soy root nodules. So even though heme is what gives their meat its bloody juices and flavor, they’re not actually just dumping blood in their veggies. They’re using the heme in veggies to make it taste just like meat! They took some soy DNA that codes for heme, and inserted it into some yeast. And the yeast then produces this plant blood! Freaky? A little. Delicious? You better believe it.

These food scientists also had to engineer the proteins necessary to give their burger the right mouthfeel, the right bounce, so that biting into a mouthful of veggies would feel just like biting into a Quarter Pounder and not chewing on a mouthful of dandelions (an important part of selling burgers, apparently). To simulate muscle tissue, they used wheat and potato proteins. To simulate connective tissues, they used soybeans and wheat gluten. And to mimic the fat of a burger? Coconut oil. The final flavor enhancer to make it taste like beef? Honeydew melon. Who would have thought?!

Lots of people think so. And it’s not just vegans, either. You know who else wants in on the plant-based meat revolution? Tyson!

Tyson?! That seems wrong. After all, Tyson Foods makes $41 billion a year primarily through its sales of chicken, beef, and pork. But that didn’t stop them from buying a 5 percent minority share in the California-based vegan startup Beyond Meat. Beyond Meat also received funding from Biz Stone and Evan Williams, the founders of Twitter.

Why would Tyson be interested in vegan foods? For the money! According to the Plant-Based Foods Association, sales of plant-based food products rang in about almost $5 billion from June 2015 to June 2016, and grew faster than the overall food business. 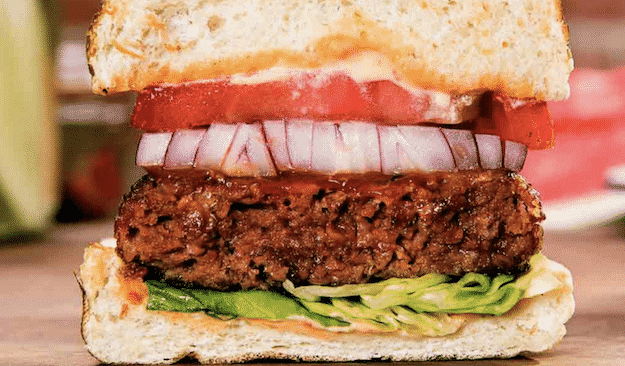 General Mills also invested in Beyond Meat. Because apparently, the food giant actually wants to keep making money in the future. Crazy, right? But they can see the writing on the wall. Killing cows and chickens is on the way out, and if they want to stay in business, they’re going to have to stay ahead of the trends. In the business world, where it’s kill or be killed, the way to keep making a killing is to stop with all the killing, apparently.

Beyond Meat makes a ton of our favorite products, but they recently outdid themselves by producing a plant-based burger that rivals beef. One of their patties has about the same amount of protein as a regular beef burger, half the saturated fat, and no cholesterol. The protein for their burger actually comes mostly from peas.

This is huge! We’ve talked about all the ways that animal-based products can’t compete with  plant-based products, that they’re cruel, they’re ruinous to the environment, they create pollution, and so on. So there are only two ways that animal-based foods can resist the vegan revolution: taste and price. And now companies like Beyond Meat and Impossible Foods have basically closed the gap on taste!

Visit the Vegan Bros on the web!