Would you like to consider a plant-based (aka vegan) diet, but find yourself confused by all the conflicting information? Let’s look at some of the most persistent myths, one at a time. Excerpted and adapted from Plant Power: Transform Your Kitchen, Plate, and Life with More Than 150 Fresh and Flavorful Vegan Recipes by Nava Atlas. ©2014, published by HarperOne, reprinted by permission. Photos by Hannah Kaminsky.

You’ll never get enough protein on a plant-based diet. While longtime vegans regard the “Where do you get your protein” question as an annoyance, I look at it as an opportunity to enlighten the curious. It truly isn’t difficult to get sufficient good-quality protein on a whole-foods plant-based diet.

It’s easy to get weak and sickly on a plant-based diet. Weak and sickly? Tell that to the growing number of elite athletes who are fueling their feats on entirely plant-based regimens. In Becoming Vegan, authors Brenda Davis, RD, and Vesanto Melina, MS, RD, write, “The vast majority of studies assessing the dietary intake and nutritional status of vegans reassure us that well-planned vegan diets can supply adequate nutrition.” It might be convenient to argue that unless some planning is done, a plant-based diet can leave its practitioner feeling less than optimal. But the same can be true of any regimen, including the standard American diet. Just look at the statistics, and the damage done to our collective health is obvious and alarming.

Plant-based diets are by definition more healthful than other diets. Some “junk- food vegans” and “carboholics” believe that simply by eliminating animal products they’re automatically healthier. Not true. A diet based on baked goods and snacks, even if they’re vegan, won’t promote good health in the long run. 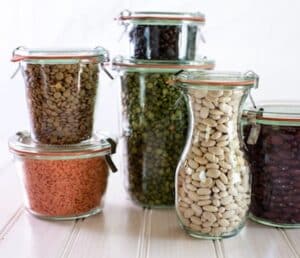 You’ll always be hungry, as the food isn’t filling enough. I hear this one a lot, but, oddly, I hear it only from people who don’t actually eat a plant-based diet. They’re anticipating hypothetical hunger rather than reporting actual results. Many plant-based staples are made up of complex carbohydrates that the body digests slowly and steadily, fueling you for hours at a time. This being said, many people who adopt plant-based diets report feeling lighter and cleaner.

Plant-based diets are centered on soy products, and soy is bad for you. Admittedly, there are many people who have soy allergies and sensitivities, and this is a legitimate concern. As with any food to which one is allergic or sensitive, one should avoid it if these conditions exist. Fermented soy foods, which include miso and tempeh, are considered the best ways to use soy, followed by tofu, edamame (fresh green soybeans), and soy milk. There’s so much contradictory information—and disinformation—available concerning soy products. If you’re concerned about soy, read the well-researched article by PCRM, Soy and Your Health.

Plant-based diets are boring and restrictive. If I could dispel but one myth, I would want it to be this one! Everyone I know who has adopted a plant-based diet claims that their culinary horizons have expanded, rather than shrunk. When you realize that there are new grains to discover, more veggies to love, and ethnic cuisines to explore, you’ll see that this way of life is about addition, not subtraction. Even if you have no intention of going fully vegan, anyone can benefit from incorporating more plant-based meals into his or her repertoire.