Ahiflower is a new source of daily omega-3 fatty acids, which we know most of us can use. Having only been vegetarian a short time, I have (regrettably) taken fish oil and krill oil supplements in the past, as well as flax seed oil. And, here was Ahiflower, a new omega-3 supplement. And folks, It’s difficult to make omega-3 fatty acids sexy these days.

Yet, I think Ahiflower did make omega-3 fatty acids sexy again. Or, at least they’re setting a new and very high standard for these essential fatty acids. Here are the full benefits of Ahiflower compared to the alternatives. It gets somewhat technical (lots of good health info!), so I’ve gone ahead and broken it down to the most important points, without all the numbers.

So, what is Ahiflower... 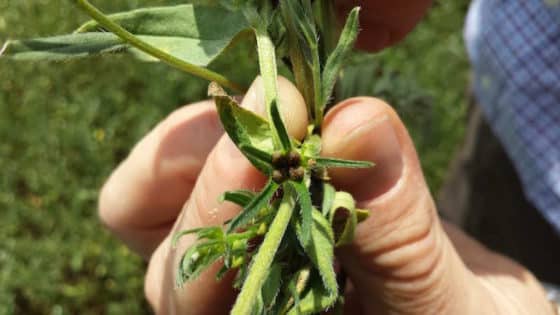 Aside from being a lush bush with beautiful white flowers, Ahiflower is a newly harnessed non-GMO source of omega-3 fatty acids. Well, it’s also a source for your daily omega-6 and omega-9 fatty acids. More specifically, those are the omega-3 ALA (alpha-linolenic acid) and SDA (stearidonic acid), omega-6 GLA (gamma linolenic acid) and LA (linoleic acid); and omega-9 OA (oleic acid).

Ahiflower is also 100% vegan, plant-sourced, 100% sustainable and 100% traceable to the British fields in which it was grown. Did I mention it’s gluten free and Kosher?

Why does that sound so impressive?

That’s because it is so impressive. Especially for an entirely plant-sourced omega-3 supplement. There is no other plant-based supplement that has the same combination of omega-3 ALA, omega-3 SDA, omega-6 LA and omega-6 GLA fatty acids that Ahiflower provides. It also has the highest-available SDA content, which converts easily into EPA (the type of omega-3 fatty acid typically only found in marine oils) more efficiently than any other plant-sourced supplement. It’s far more efficient than flax in this regard, which relies almost entirely on omega-3 ALA. Oh, that also means you don’t need to take as many gelatin-free capsules every daily. Definitely a plus.

It gets better still

Ahiflower is 100% sustainable, unlike any marine oils. Not only is Ahiflower eco-friendly, it’s also incredibly efficient with our precious Mother Earth. It’s impossible to separate our eating and the world’s resources. We just can’t escape the topic of environmentally friendly farming. There are two very important resources needed for farming that are getting scarcer and scarcer: space and water. Future crops are going to have to produce more per acre than ever before, and with less water.

That’s another reason to love Ahiflower. Flax has been the go-to vegetarian and vegan omega-3 supplement in years gone by, but that really needs to change. It simply takes too much space and too much water to meet human demand with flax.

Good news, because Ahiflower is up to 400% more effectively metabolized than flax in humans (yes, 2 human clinical studies have already been completed), Ahiflower requires less land and less water than flax to deliver the healthy omega-3 and omega-6 fatty acids we all need.

Grown only in select fields within the United Kingdom, Ahiflower is the most environmentally friendly omega-3 supplement. Not only is it more efficiently produced than flax, it is also a fantastic habitat and source of nourishment for our threatened pollinators. Seriously, bees dig these little flowers like nobody’s business.

And just in case you weren’t convinced

You know how I just said Ahiflower is only grown on very select pieces of land in the United Kingdom? That makes Ahiflower 100% traceable. That’s right, you can find out exactly where your Ahiflower oil came from. Unlike flax, which is grown throughout Russia, China, and Kazakhstan, as well as several other countries and is not 100% traceable. Not like Ahiflower. You could totally meet the farmer who grew your Ahiflower. Okay, that I can’t promise, but it’s like that.

Grown only in UK fields, the Ahiflower seed is turned into oil at a single processing plant in Canada. Unlike many supplements processed in China and other countries, Ahiflower is only turned into oil in one solitary plant, ensuring more control over the supply chain than flax.

To wrap it up

Normally I don’t do these sorts of things. I’ve been helping Nava and VegKitchen behind the scenes for over a year, but this is one of the few times I’ve written something for the site. And yes, it is sponsored by Ahiflower. Most of the information is from them, but opinions are all me.

As I’ve made the important decision to go vegetarian (and hopefully one day vegan!), it’s become even more important to me to think about how my eating and my diet affect the world around me. The decision for me was based on two things: not eating animals and helping to preserve the planet. I’ll admit to being a really bad environmentalist most of the time, but all of us making small changes can have an immeasurable impact.

Luckily for us, when it comes to our daily omega-3 supplement, doing what’s good and beneficial for our bodies is also better for the earth. If you haven’t considered Ahiflower yet, I highly recommend giving it a try. As they say, it's "Better than flax. Not from fish."

If you’d like to try Ahiflower oil in vegan softgels or as a liquid oil (great for smoothies!), you can find a list of places that sell Ahiflower on their website. You can also enter for your chance to win a 3 month supply of Ahiflower here on VegKitchen!

This article originally appeared on OhMyVeggies.com as Why Ahiflower May Replace Flax Seed Oil for Vegetarians and Vegans.