The peppery flavor of watercress provides a delightful contrast to the sweetness of summer corn in this delicious cold soup. Adapted from Vegan Soups and Hearty Stews for All Seasons. 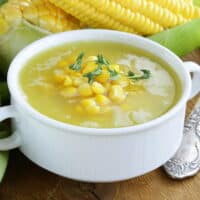 Cream of Corn and Watercress Soup