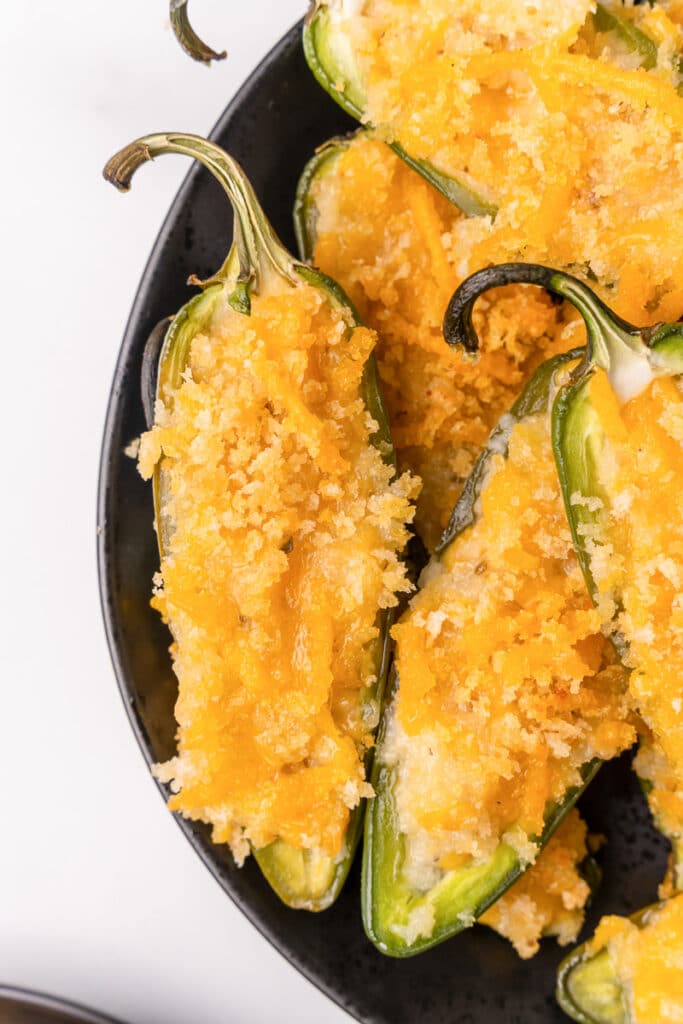 These easy vegan jalapeno poppers are the ultimate party appetizer. Packed with a cheesy dairy-free filling and topped with crunchy panko breadcrumbs.

We are currently right in the thick of the holiday season. And that means I've been hosting and attending lots of parties. Yay for being able to socialize again!

But that also means I've found myself in need of some easy vegan appetizers that I can throw together quickly and that please a crowd of both vegans and non-vegans alike.

Enter these tasty (and super easy) vegan jalapeno poppers! They're made with just a handful of ingredients in under 30 minutes. What's not to love?

And if you need a few more appetizers for your party, serve them up alongside these vegan mozzarella sticks and this vegan charcuterie board. Now that's a party spread!

While I typically cook with as many fresh ingredients as possible, these vegan jalapeno poppers use a few handy store bought vegan items to make them as quick and easy as possible! Here's what you'll need.

See the recipe card below for detailed measurements and instructions.

How to Make Vegan Jalapeno Poppers - Step by Step

These tasty little morsels are so delicious and so pretty - no one will know you made them in under 30 minutes!

Slice the jalapeno peppers in half, and carefully remove the seeds. Be careful when touching the peppers - they are spicy!

Fill each jalapeno pepper with the creamy filling. Then top with additional vegan cheese and breadcrumbs.

Bake at 400 degrees Fahrenheit for 20 minutes, and enjoy!

And there you have it - totally delicious vegan jalapeno poppers. Ready to go in under 30 minutes!

I keep a pack of these disposable kitchen gloves in my pantry for tasks like de-seeding jalapeno peppers. They are very spicy! If the oils get on your hands, and you then touch your face, it burns like crazy.

Mix up the cheese. Instead of a vegan cheddar cheese, try this recipe with other varieties. It also works well with Monterey Jack style or mozzarella style vegan cheese shreds.

Store leftover jalapeno poppers in the refrigerator for 2-3 days, in an airtight container. I don't recommend freezing this recipe.

Reheat in the oven at 350 degrees Fahrenheit until warmed through. This will help get the topping crispy again.

If you love these vegan jalapeno poppers, be sure to check out these other delicious recipes that are perfect for entertaining: