Essential fatty acids are one component of a healthy, well balanced diet. Healthy fats seem to be getting more press lately, especially in the vegan/vegetarian world, as many people find that they don’t feel their best eating a low fat, high carbohydrate diet.

This may be because many people, even vegetarians and vegans, are healthy-fat deficient. Getting enough essential fatty acids is really one of the easiest things to do. It isn’t like trying to find an animal product-free source of vitamin B-12, or worrying over getting enough calcium, iron, or vitamin D. This is because EFA’s are found primarily in vegetarian foods, and even omnivores turn to plants for their EFA’s. One popular example is supplementing with flax seed oil which is rich in omega 3 fatty acids.

OMEGA 3 FATTY ACIDS are harder to come by than omega 6 fatty acids. Omega 3 is a form of polyunsaturated fat, and contains 3 different acids: EPA, DHA and ALA. All three of these acids can be found in plant foods, however the easiest to acquire is ALA, which is the omega 3 acid found in flax seed, hemp seed, chia seed, and also, although in smaller amounts, in walnuts and green leafy vegetables.

EPA and DHA are mostly found in cold-water fish like salmon and tuna — things that vegans don't eat — but can also be found in sea vegetables and algae such as spirulina, Klamath blue-green algae, E3 live and chlorella. All three of these fatty acids aid in numerous things such as prevention of heart disease, high blood pressure, high cholesterol, arthritis, depression, skin conditions of all sorts and diabetes. Polyunsaturated fats are absolutely vital in normal cell structure. Having healthy cells means having a healthy body. 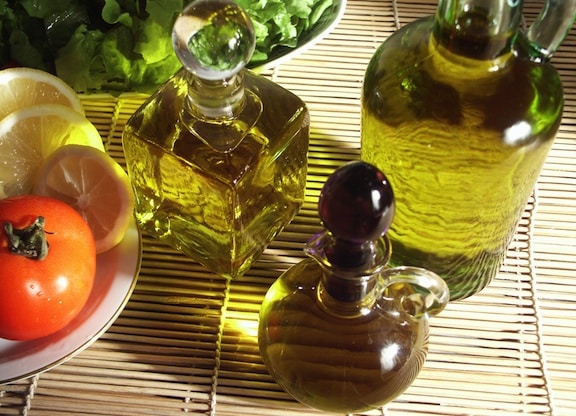 The traditional vegetarian diet is often times high in omega 6 fatty acids but low in omega 3. Omega 6’s are found in many vegetarian foods like whole grains, olive oil, other vegetable oils, and avocados. Since omega 6 fatty acids are easier to come by, special attention should be given to the omega 3’s, however both are essential. Flax seed oil is extremely high in omega 3’s, approximately 56%, while only containing 16% omega 6’s. This is good if you are deficient in omega 3’s, but flax shouldn’t be consumed long term, because it can throw your EFA balance off. A healthier, long-term EFA supplement to your diet is hemp, which contains a much more balanced ratio.

The great thing about getting more EFA’s in your diet is that you will also be subsequently adding many other healthy nutrients as well. The foods high in EFA’s are nutritional power houses also loaded with vitamins and minerals such as beta-carotene (vitamin A), tocopherols (vitamin E), and many other anti-oxidants. It’s like a double bonus!

Other veg-friendly foods containing healthy fats are brazil nuts (rich in selenium), macadamia nuts (a beauty food, rich in monounsaturated fat), olives (a mineral dense fruit), and raw coconut oil (an extremely stable saturated fat with medium chain triglycerides.) It is important to note that all of these EFA foods should be eaten uncooked as to not change the structure of the fats from something healthy to something harmful.