Vegan quesadillas are a  delectable meal, making it easy to get dinner on the table in a hurry. This combination of sweet potatoes, zucchini, and corn is especially delicious with salsa verde (tomatillo salsa), though it's great with tomato-based salsa as well. Photos by Evan Atlas.

Microwave or bake the sweet potatoes until done but still firm. Allow to cool, then peel and slice not more than ¼ inch thick.

Preheat the oven to 400 degrees F.

Combine the zucchini and corn kernels with a small amount of water in a medium skillet; cover and steam until the zucchini is tender-crisp, then remove from the heat.

Repeat with the remaining tortillas. If using smaller tortillas, divide the ingredients among them in the order given, in smaller quantities. Use an additional baking sheet if needed.

Bake for 10 to 12 minutes, or until the tortillas begins to turn golden and crisp. Watch carefully!

Cut each quesadilla into quarters and arrange on individual plates. Pass around salsa for topping individual servings. 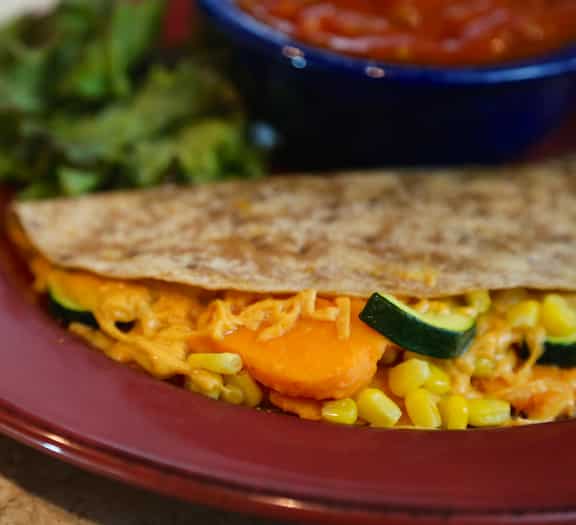