Contributed by the The Physicians Committee for Responsible Medicine. Soy products have recently enjoyed increasing popularity. Soy products include soybeans (also called edamame) and any other items made from soybeans, including soymilk, tofu, tempeh, miso, and vegetarian meat and dairy substitutes like soy meats and soy cheeses. Like most other plant foods, the most healthful choices are those that are minimally processed so they retain all of their original nutrients. But because soy products are so widely consumed, some people have raised the question as to whether they are safe. Let’s take a look at what medical studies show:

Cancer Prevention and Survival
Epidemiological studies have found that soy protein may reduce the risk for cancers including breast, colon, and prostate.1

Studies show that women who include soy products in their routine are less likely to develop breast cancer, compared with other women. In January 2008, researchers at the University of Southern California found that women averaging one cup of soymilk or about one-half cup of tofu daily have about 30 percent less risk of developing breast cancer, compared with women who have little or no soy products in their diets.2 However, to be effective, the soy consumption may have to occur early in life, as breast tissue is forming during adolescence.3,4

What about women who have been previously diagnosed with breast cancer? The Women’s Healthy Eating and Living Study showed that women previously diagnosed with breast cancer gain a major advantage by incorporating soy products into their diets. Those who consumed the most soy products cut their risk of cancer recurrence or mortality in half. Similarly, a study in the Journal of the American Medical Association reported results based on 5,042 women previously diagnosed with breast cancer who were participating in the Shanghai Breast Cancer Survival Study over a four-year period. The study showed that women who regularly consumed soy products, such as soymilk, tofu, or edamame, had a 32 percent lower risk of recurrence and a 29 percent decreased risk of death, compared with women who consumed little or no soy.5 Meanwhile, a study at Kaiser Permanente suggested much the same thing. Women who avoid soy products get no advantage at all. Those who include soy products in their diets appear to cut their risk of cancer recurrence.6

A 2012 analysis that combined the results of prior studies, including a total of 9,514 women from the United States and China, showed that those who consumed the most soy products were 25 percent less likely to have their cancer return, compared with those who tended to avoid soy products.7 Other studies, including the Women’s Healthy Eating and Living Study, have found that there was no effect or a favorable effect on breast tissue density in breast cancer survivors consuming soy, regardless of hormone receptor status.8,9

Why should soy products reduce cancer risk? Most research has zeroed in on phytoestrogens found in soybeans (phyto means "plant”). Some researchers have suggested that these compounds somehow block the effects of estrogens. However, that does not appear to be the entire explanation, as diet effects may also benefit people with estrogen-receptor-negative cancers.

Male Hormones
Soy products have no adverse effects on men and may help prevent cancer in men. A meta-analysis published in Fertility and Sterility, based on more than 50 treatment groups, showed that neither soy products nor isoflavone supplements from soy affect testosterone levels in men.13 An analysis of 14 studies published in the American Journal of Clinical Nutrition showed that increased intake of soy resulted in a 26 percent reduction in prostate cancer risk.14 Researchers found a 30 percent risk reduction with nonfermented soy products such as soymilk and tofu.

Fibroids
Soy products may reduce the risk of fibroids, knots of muscle tissue that form within the thin muscle layer that lies beneath the uterine lining. A study of Japanese women found that the more soy women ate, the less likely they were to need a hysterectomy, suggesting that fibroids were less frequent.15 In a study of women in Washington State, soy did not seem to help or hurt, perhaps because American women eat very little soy, compared with their Japanese counterparts.16 What did have a big effect in this study were lignans, a type of phytoestrogens found in flaxseed and whole grains. The women consuming the highest amounts of these foods had less than half the risk of fibroids, compared with the women who generally skipped these foods. So, again, phytoestrogens seem beneficial, countering the effects of a woman’s natural estrogens, although in this case the benefit comes from foods other than soy.

Clinical studies show that soy products do not cause hypothyroidism.17 However, soy isoflavones may take up some of the iodine that the body would normally use to make thyroid hormone.18 The same is true of fiber supplements and some medications. In theory, then, people who consume soy might need slightly more iodine in their diets. (Iodine is found in many plant foods, and especially in seaweed and iodized salt.) Soy products can also reduce the absorption of medicines used to treat hypothyroidism.17 People who use these medicines should check with their health care providers to see if their doses need to be adjusted.

Other Health Effects
A study looking at the diets and measures of inflammation in 1,005 middle-aged Chinese women who were part of the Shanghai Women's Health Study showed that the more soy products the women consumed, the less inflammation they experienced. Inflammation is linked to cancer, type 2 diabetes, and cardiovascular disease.19 Soy products appear to reduce low-density lipoprotein (“bad”) cholesterol.20 They may also reduce the risk of osteoporosis-related hip fractures. In a study published in the American Journal of Epidemiology, women who consumed at least one-fourth cup of tofu per day averaged a 30 percent reduction in fracture risk.21 A study in the journal Menopause found that women taking soy isoflavone supplements for six weeks to 12 months reduced the frequency of hot flashes by 21 percent, compared with women taking a placebo.22 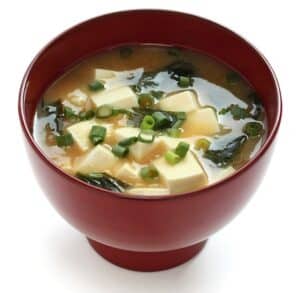 Overnutrition
Soy products are typically high in protein. Some manufacturers have exploited this fact, packing isolated soy protein into shakes and turning it into meat substitutes. However, it may be prudent to avoid highly concentrated proteins from any source, including soy. It has long been known that cow’s milk increases the amount of insulin-like growth factor in the bloodstream,23 and this compound is linked to higher cancer risk. Some evidence suggests that highly concentrated soy proteins (indicated as “soy protein isolate” on food labels) can do the same.24 Simple soy products, such as tempeh, edamame, or miso, are probably the best choices.

Contributed by The Physicians Committee for Responsible Medicine. Visit their site for lots of news and recipes pertaining to plant-based diets.