Excerpted and adapted from Food Choice and Sustainability by Dr. Richard Oppenlander, by permission. In 2006 much of the world was shocked by news that burgers and steaks that everyone were eating were somehow contributing to greenhouses gases and climate change. In the repost by the UN Food and Agriculture organization LEAD committee, Livestock’s Long Shadow, authors Henning Steinfeld et al. made it known that livestock’s contribution to greenhouse gas emissions is 18 percent — more than that produced by the entire transportation sector (all the cars, planes, trains, buses, and trucks that we drive and fly every day in the world) at 13 percent.

Most of us are aware of this finding now and, by itself, should have marked the beginning of the end for the livestock industry. However, although the 18 percent figure and report have been frequently cited, and therefore readily seen by the general public, minimal change in eating patterns have taken place in the years that have elapsed since that report first surfaced. While the annual U.S. consumption of beef has dropped slightly, the amount of pork, chicken, turkey, fish, eggs, and dairy consumed worldwide has all increased. Consider:

There are many reasons for these dismal findings and projections, but all are bonded in 3 primary problems. First, there remains a general lack of awareness, globally, of the connection between eating animals and climate change. Second, for those that have been introduced to the connection, there still remains disbelief or indifference. And third, those leaders and policy makers in the US, as well as other countries, who are in touch with this problem and are in a position to make change (or impose it) simply don’t have the wherewithal to step forward and do the right thing on a national or international level. It remains something they just don’t want to deal with most likely because it cuts deeply into their own cultural and social influences, belief system, and acquired taste preferences — combined with placing their concern for continued economic viability of the meat, dairy, and fishing industries above a concern for viability of our planet.

Of major importance is that the 18 percent figure no associated with livestock’s contribution to climate change, in all likely hood, was vastly understated — and the more accurate higher percentage very well may have been suppressed...And since the UN-FAO report was made public in 2006, other respected researchers have found that livestock produce up to 51 percent of all anthropogenic green house gas emissions found in our atmosphere.

It is interesting to note that whenever there is a significant study or finding exposing another detrimental effect of raising and eating animals, there appears to be a clear subversive attempt to suppress, mismanage, or disregard the information. Examples abound. In 2009, Carnegie Mellon and the WWF-UK Food Climate Research Network produced studies demonstrating that transportation (eating non-local foods) was an insignificant component of all greenhouse gases emitted in the entire food production process. Nearly all ensuing articles written by other organizations excited this work failed to make the final connection — the elimination of all animal products (meat, dairy, and fish) from production and consumption.

Tara Garnett, one of the contributors to the WWF-UK/Food Climate Research Network a report, argues, “Broadly speaking eating fewer meat and dairy products and consuming more plant foods in their place is probably the single most helpful behavioral shift one can make to reduce food -related green house gas emissions” — which then furthers support for the “eating less meat” movement. 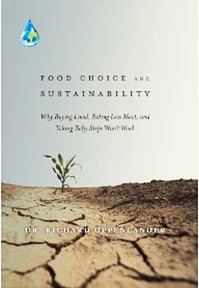 Let’s rephrase Dr. Tara Garnett to be more accurate: “Broadly or specifically speaking, eating no meat and dairy products and consuming only plant foods in their place is undeniably the single most helpful behavioral shift one can make” to reduce food related green house gas emissions. Another significant behavioral change is to address the issues in a proper manner by authors, researchers, the media, and anyone disseminating information. If it is established that a fire is burning a vital structure to the ground, room by room, lets about putting the entire fire out — now — not simply “reducing” it.

To learn more about Dr. Oppenlander’s work, visit him on the web at Comfortably Unaware and Inspire Awareness Now.