Contributed by Brendan Brazier. It’s certainly not uncommon for competitive athletes to try a plant-based diet, just uncommon for them stick with the plan of being a vegan athlete. With sincere intentions to improve their health naturally and benefit their performance, many high-level athletes try eliminating animal products from their diets. So why, after a short period, do the majority revert back to consuming animal products? Quite simply, there’s not enough information out there. Following is a list of problems athletes commonly have when switching to a vegan diet — and their solutions. 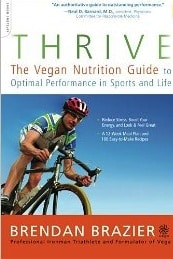 Which can lead to low energy levels; this is common for active people who have stopped consuming animal products.

Dietary Protein: Active people need more protein than the average person does. Often when animal products are eliminated from the diet, so is a large portion of the protein. Without adequate dietary protein the carbohydrate consumed will enter the bloodstream faster, causing insulin levels to rise quickly (spike), and then a short time later decline (crash). With protein and snack added to each meal a “sugar crash” will not occur. Protein will complement the carbohydrate, allowing it to enter the bloodstream at a steady rate, thus delaying the onset of hunger and sustaining energy levels.

Protein, a vital part of an athlete’s diet, is used in the rebuilding process of muscle tissue broken down by training. During endurance training at a low heart rate (60-70% of maximum), fat is the body’s primary fuel source (90%) with protein second (10%). Because Ironman and other endurance training requires the body to be efficient at using fat as fuel, long rides in this zone are necessary. A six-hour-ride, for example, would burn nothing but protein as fuel for 36 minutes.

If dietary protein needs are not met, muscle tissue will be catabolised; in turn, strength will decline. A 4:1 carbohydrate to protein ratio has been shown to yield the best muscle glycogen recovery results. The small amount of protein (25%) combined with a high glycemic carbohydrate (sugar) has been shown to improve recovery over the conventional “sugar only” approach. Sweetened soy drink is a good provider of this ratio.

Dietary Fat: Once animal products are eliminated, so is a large portion of the fat. The dairy industry measures fat as percentage of volume, not as percentage of calories. For example, 2% milk is in fact 33.5% fat. Cutting all fat out of the diet is not the goal, although saturated fat should be minimized for optimum performance. A very low fat diet is OK for a low to moderately active person. However, a highly active person, especially an endurance athlete who has adopted a plant-based diet, will benefit by adding good quality fats to his/her meals.

As with protein, fat helps to slow the rate at which the carbohydrate enters the bloodstream, thus providing sustained, consistent energy. Dietary fat also helps the absorption of fat-soluble vitamins such as vitamin E. Vitamin E is a powerful antioxidant that will help quicken the recovery process. Cold pressed oils such as flax and hemp are extremely valuable to the vegan athlete. Both flax and hemp oils contain omega-3 fatty acids, and, most importantly, have anti-inflammatory properties. These oils vastly speed the recovery and repair of soft tissue damage, a toll of daily training.

During times of level 1 (60-70% of maximum heart rate) endurance training in the fat burning zone (also know as metabolism training), the athlete should consume a combination of carbohydrate and protein in an easily digestible form

Consume protein and good quality fat as part of each meal and snack.

Tip: If you make bread, muffins, or any baked goods, leave out some of the flour and replace it with soy protein powder, hemp flour, or bean flour. Use hemp seed oil as a base for salad dressing or to mix with a soy drink to make it creamier. Use hemp seed oil on cereal and in baking.

Low sodium level: Lack of dietary sodium combined with regular sweating will deplete sodium stores. Athletes who have adopted a plant-based diet are prone to reduced sodium levels, often resulting in muscle cramping and stiffness. Dairy products in particular contain high levels of sodium. Also, salami, pepperoni, baloney and most all prepared meats contain very high levels of sodium. Most plant sources have little sodium with the exception of some seaweeds. Sedentary people, vegan or not, do not need to be concerned with a lack of dietary sodium; however, vegan athletes do. As with many nutrients, sodium requirements become elevated as activity increases.

During times of heavy training, producing a high sweat rate, the vegan athlete will benefit by salting his/her food. By adding sea salt to regularly eaten foods, the athlete will notice that muscle cramping subsides and suppleness returns. Due to excessive sweating, produced by racing in a hot environment, the athlete may need sodium tablets. Leading up to a long race such as Ironman, the athlete must pay special attention to ample salt intake that will result in lower dependence on race day. Salt stores will be preserved. A healthy, active person will not experience a rise in blood pressure with the addition of dietary sodium.

Low calcium level: Low calcium levels in vegan athletes are usually due to a combination of lack of dietary calcium and hard training. Calcium is used during muscle contractions, causing many endurance athletes, vegan or not, to have reduced stores. For example, an athlete who cycles for 5 hours at the standard cadence of 90 rotations per minute will perform 54,000 muscle contractions. The contractions are from a combination of the three biggest muscles in the body (gluteus maximums, quadriceps, and hamstrings) obviously a significant draw on the body’s calcium reserves.

An athlete who consumes calcium-rich foods at each meal will benefit by developing supple, limber muscles.

To maximize the absorption of calcium from sesame seeds, grind them in a coffee grinder. I recommend grinding a mixture of sesame seeds and flax seeds and keeping them in the fridge for convenient, daily use.

Reduced tolerance to aerobic exercise; possible anemia: When red meat is eliminated from an active person’s diet, the long-term effect is often a reduction in red blood cells often leading to anemia. Vegan or not, athletes have traditionally had trouble maintaining satisfactory iron levels for optimal performance. Maintenance of iron stores becomes increasingly difficult during times of heavy training. As with sodium and calcium, iron is lost in sweat, making warm weather training more of a draw on iron stores. Unlike sodium, iron levels can take up to six months to become dangerously depleted. Often not realizing this, the athlete will wonder how performance has declined without any change in diet or activity level. Because iron levels take considerable time to become diminished, rebuilding takes equal time. Obviously, a six-month-rebuilding phase would best be avoided. Iron is also lost as a result of compression hemolysis (crushed blood cells due to intense muscle contractions).

The more active the person, the more dietary iron is needed. Constant impact activity, such as running, reduces iron levels more dramatically due to a more strenuous form of hemolysis. With each foot strike a small amount of blood is released from the damaged capillaries. In time this will cause anemia if the athlete does not pay close attention to diet.

If a vegan diet is something you would like to try, make sure you go about it the right way the first time. If you have tried and failed in the past, it’s not your fault because there’s very little support available. However, as with sport itself, the rewards are worth the perseverance.

Many athletes who have properly adopted a vegan diet have noticed an improved recovery rate. Obviously, if the athlete can recover faster he/she can train more, facilitating quicker improvement. I’m not saying that more training is necessarily better, but I am saying that speedy recovery in that training is important.

Brendan Brazier is the author of Thrive: A Nutrition Guide to Optimal Performance in Sports and Life.* Visit his web site.