Vegan Outreach (VO) is a remarkable organization, having produced and distributed over 30 million pro-veg booklets. Founded in 1993 with the goal of moving society away from eating animals and their products, its army of outreach coordinators and volunteers personally hand out their concise yet hard-hitting informational booklets to millions of people each year on college campuses and other venues.

VegKitchen got a chance to ask VO how they operate, why they’ve been so effective, and how others can get involved in helping them promote a compassionate plant-based diet, one person at a time. Photo above is from one of VO's booklets, Compassionate Choices.

VO has been around since 1993, nearly a quarter of a century. How did you get started leafleting colleges?

Vegan Outreach’s co-founder, Jack Norris, got the idea to do the first college leafleting tour in 1995. He traveled to 248 colleges in 44 states and found that many college students were receptive to the message.

What are the booklets that you produce?
Compassionate Choices is our main booklet and discusses how animals are treated on modern farms and slaughterhouses and how someone can stop supporting this animal suffering by eating vegan. Even If You Like Meat is a more graphic version of Compassionate Choices, and Why Vegan is also similar but with a stronger push for veganism intended for audiences who might be more open to the idea.

We also have Compassionate Athlete which features vegan athletes and a Guide to Cruelty-Free Eating that contains recipes, nutrition tips, and other resources for people want to leave off animal products. All these booklets are available here.

What kind of effect does the handing out of booklets, person to person, have in comparison to a website or magazine on the subject of veganism?

Distributing leaflets and making that person to person contact can have a variety of effects. First, the person receiving the leaflet may make direct changes to their diet, having been moved by the suffering of farmed animals. The leaflet may not cause direct diet change immediately, but it may heighten the person’s awareness about farmed animals. This makes the person more likely to change their diet in the future if presented with this information again.

The person who originally received the leaflet may also impact other people by sharing the information they learned either through conversation or passing off the leaflet. Leafleting can also create an opportunity for community building within animal protection. It’s a low barrier-to-entry activity for new animal activists and taking part in leafleting outings builds important connections between people and organizations who help animals.

Is one of the goals of handing out booklets to get the person distributing to engage with the person receiving?

Direct distribution of the information definitely offers the opportunity for students to ask questions, but our main goal is to hand out as many booklets as we can while we’re on a campus, so we don’t spend much time trying to engage in conversation.

Has the response to these booklets and the information they contain changed over the years? After all, veganism, if not quite mainstream, is definitely much more widely known than it was in 1993.

Our general experience is that, on average, students have gone from thinking veganism is bizarre and silly, to thinking it’s a good idea but difficult. A lot of progress has been made!

How would you break down the response to the booklets at the moment of exchange, from receptive to defensive?

When you greet them with a smile most students are willing to take the leaflet, and they walk away looking it over. Some stop to ask questions about being vegan or to tell us their experience with being vegetarian or vegan.

On rare occasions, someone will want to argue. In some cases these are ag students who aren’t going to change, but in other cases, it’s someone who’s expressing their own inner conflict about eating animals and by responding considerately, you can help move them in the right direction.

In the course of discussing veganism with the recipients of the booklets, what would you say is the biggest stumbling block or concern people have about going vegan?

We conducted a focus group a couple years ago and students listed the following barriers to becoming vegan:

None of this was terribly surprising, but we’ve decided to try to focus more on alleviating these barriers and are in the process of testing messages that do so.

30 million booklets is a staggering amount to have distributed since VO’s inception; very impressive! How do you fund the creation of so much material?

Almost all of VO’s funding comes from individuals—mostly other vegans who want to see the lifestyle spread and appreciate the way VO approaches our work. We don’t go for sensational headlines—rather, we take a more direct approach where we can provide a complete argument directly to people who might never be reached in other ways.

Many of our donors have themselves leafleted or have been involved in our Vegan Mentor Program or community events and have seen firsthand the difference these programs make. And many of our donors actually became vegan due to reading one of our booklets many years ago! 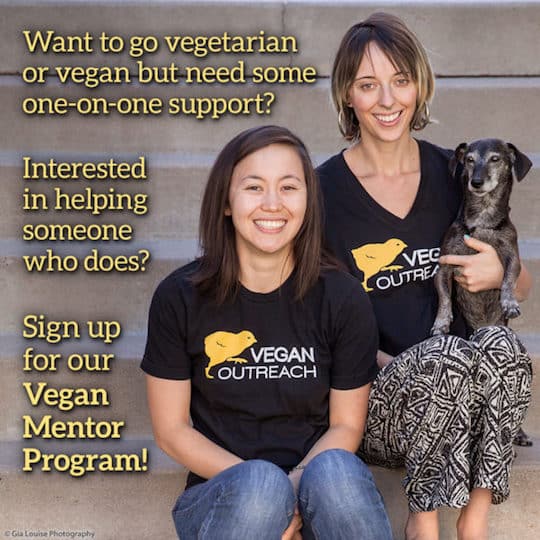 How do you find and train volunteers to do the distributing? Have they all been already committed vegans, or does doing this kind of work sometimes help them go from vegetarian to vegan?

Most, but not all, of our volunteers are vegan. Many find Vegan Outreach online through an internet search or through our social media. Our Outreach Coordinators (OCs) sometimes post their leafleting tour schedules on their social media pages or send them to other animal groups to recruit volunteers.

We also recruit volunteers from VegFests that we attend throughout the year.

From your website, it seems like your core mission is to get people to understand violence against animals. What’s a good way to get people to see the disconnect? For example, there are many who would willingly spend thousands to get their dog needed surgery, but then have no problem with eating the animal on their plate.

Most people nowadays have a vague awareness that farmed animals don’t have great lives or deaths, but they often don’t know the specifics—our booklets help bring the reality home for them. And as you mentioned, our booklets point out the inconsistent thinking regarding how people care about dogs and cats but eat farmed animals. We reassure people that they don’t have to eat animals to be healthy, as many still believe.

How can VegKitchen readers help your organization, or volunteer?

If you’d like to learn more or get involved in Vegan Outreach, please visit our website, VeganOutreach.org.