Making a big pot of chili is a great thing to do when the weather is cool or rainy. Most recipes make a heaping helping, so if you’ve had it for two nights running (and don’t want to freeze it), here are 5 ways to make leftover chili more enticing!

First, here are a few great chili recipes to choose from:

Chili Mac: A classic American iteration of basic chili, Cincinnati Chili Mac (shown above) is served over spaghetti. A key spice in the chili is cinnamon, for reasons unknown — but it does work well. Cook 8 to 10 ounces of whole grain spaghetti. Add a teaspoon of cinnamon to your leftover chili when reheating. Serve the chili over the spaghetti and finish with any the usual toppings if you’d like, though these are entirely optional. If you want a more formal recipe, here's Cincinnati Chili Mac. 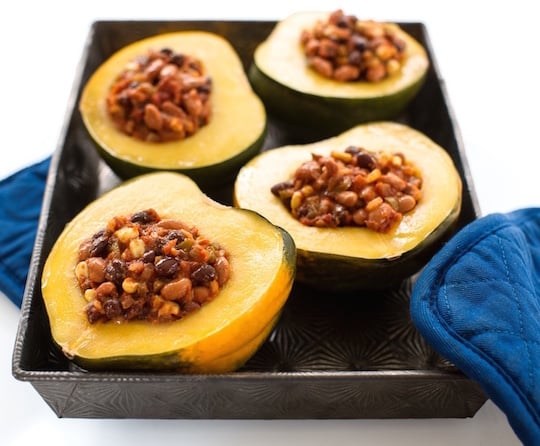 Stuff it into winter squash: Use as many small hard squashes as you need. Choose from acorn, golden acorn, small butternut squashes, or the smallest possible sugar pumpkins. See directions for how to pre-bake them so that they’re easier to cut in our post on How to Cut a Butternut Squash Without Losing Your Mind — which applies to other squashes as well. Acorn, golden acorn, and other small squashes microwave pretty well, too. Start with 3 minutes per squash, test for doneness, and go from there. When cool enough to handle, scoop out and discard seeds and fibers. Stuff the cavity with leftover chili. Reheat in the oven or microwave if needed. 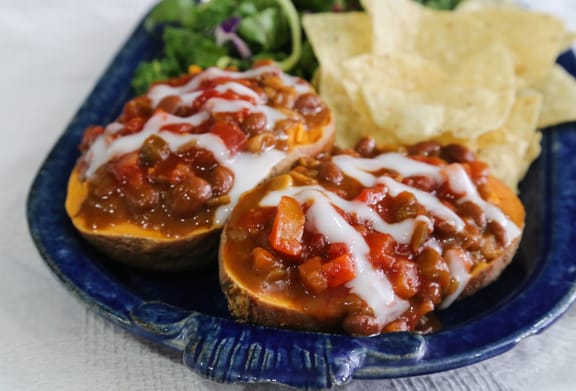 Top smashed sweet potatoes: Bake or microwave sweet potatoes as needed. Cut in each in half and arrange cut side up on individual plates or arrange on a serving platter. Smash with a potato masher and top with leftover chili. A dollop of vegan sour cream or cashew cream makes this extra tasty. Two medium to large halves of chili-topped sweet potatoes make a filling main dish that’s so good you’ll forget you’re eating leftovers. 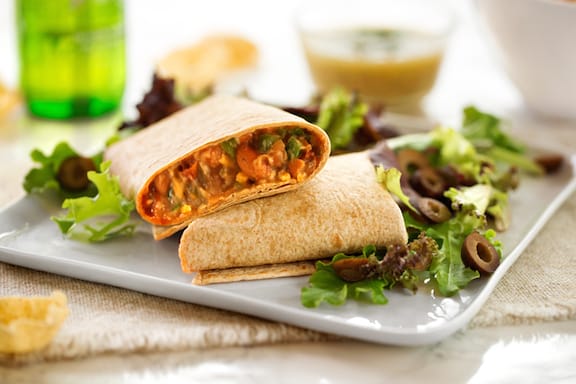 Wrap it up in a burrito: Leftover chili makes a wonderful bean burrito, not surprisingly. Place a dollop of warmed-up chili in the center of each 10-inch flour wrap. Sprinkle with non-dairy cheese if you’d like, and/or a bit of salsa. Tuck in two ends, roll up, and eat out of hand. 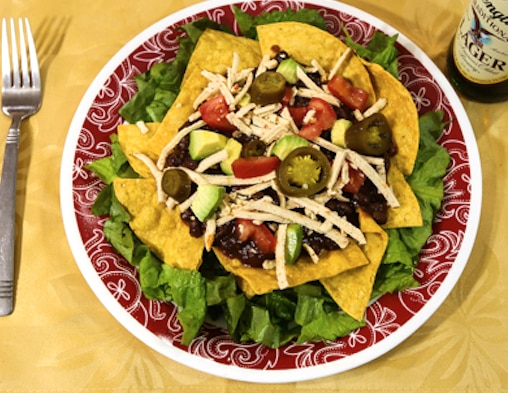 Top nachos with it or use in a warm taco salad: Spread tortilla chips on a large platter (if microwaving) or on a baking sheet (if going the oven route). Spoon some leftover chili over them, followed by shredded vegan cheddar or nacho cheese and sliced scallion and/or sliced or minced jalapeños. Microwave or bake (at 400º F.) until the cheese is bubbly. Serve with salsa, if you’d like. Or, use as a layer on a taco salad as shown above.