This stew contains peanuts, sweet potato and black-eyed peas—a triumvirate of nutrient-dense, delicious crops. Time does the work with this stew. The longer it sits, the more lovely and complete the flavor.

This stew pairs beautifully with rice or flatbread. You can serve it with homemade naan or injera as well.

How to Make African-American Sweet Potato and Peanut Stew

Full directions for how to make African-American Sweet Potato and Peanut Stew are in the printable recipe card below.

How should I store leftover stew?

You can store leftover stew in an airtight container in the fridge for up to one week. Alternatively, if you need to save it for a long time, you can store this stew in the freezer for up to 3 months.

Can I substitute the veggies in this stew?

You can easily swap out the veggies in this stew for pretty much anything you have on hand. Try swapping out zucchini, other varieties of squash, carrots, peas, etc. 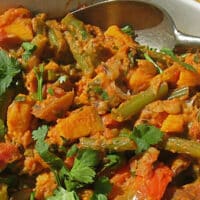 Ellen Kanner is the Huffington Post’s Meatless Monday blogger, the syndicated columnist of the Edgy Veggie and contributor to publications including Culinate, Bon Appetit and Every Day With Rachael Ray as well as her own blog Edgy Veggie.