Within the last few years, there have been analyses that show that all rice varieties contain at least some minuscule level of arsenic. Arsenic is a naturally occurring element. It’s found in soil, water, plants, and animals. Going beyond a certain threshold, arsenic is a toxin and exposure to it should be minimized.

There was much discussion about this in the media in the last several years. A fair amount of the concern was that rice cereal is often an infant's first food. Even lots of healthy food enthusiasts draw a blank when it comes to arsenic in rice. No need to panic, but it pays to have some solid information.

Few experts have suggested avoiding rice altogether, but rates of arsenic vary depending on variety, but more importantly, where it’s grown. Rice from Texas, Louisiana, and Arkansas in the U.S. lead the way in terms of arsenic levels due to the soil in which they’re grown. Whether you buy in bulk or at the supermarket, you can always see where the rice comes from on labels and on the bulk bins. You may want to find alternatives to varieties from those big rice-producing states.

According to RealNatural.org: “Organic brown rice grown in California had the lowest levels of all 134 samples, with 0.10 micrograms/gram. This indicates that organic rice is not necessarily higher in arsenic, and is most likely lower in arsenic.

The reason is found in the soil. Rice crops with more arsenic content are grown in fields that have been previously sprayed with arsenic-based chemical pesticides. Those arsenic residues will contaminate the soils for many years after the chemicals were sprayed (another reason to be buying organic foods).” 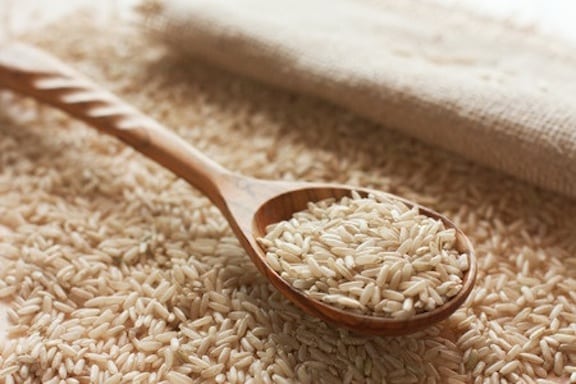 Unfortunately, it’s hard to avoid contamination in the food supply, even if you grow your own or eat mostly organic. Remember, most Asian cultures have eaten rice on a daily basis with no ill effect. So brown rice in moderation, many experts agree, has more benefits than risks. Still, it pays to educate yourself and consume rice that has insignificant levels of arsenic. Here are some excellent articles and videos:

Last but not least, rice should be very well well rinsed before cooking. Soaking overnight or for a few hours could be even better (and reduces cooking time). Another way to mitigate this is to rice the way that pasta is cooked, in lots of water — rather than boiling it dry. That’s the traditional Asian method that’s been used for millennia, and perhaps there’s wisdom in it. Here's more on how to cook rice to remove the most arsenic.

Like all foods, rice should be eaten in moderation, and it's good to mix up your whole grain intake with barley, quinoa, farro, millet, etc. If you're a rice fan, err on the side of caution by following the tips and suggestions in this post.