Here's a quick guide on how to cook brown rice as well and how to use some of the varieties. With its nutty taste and chewy texture, brown rice doesn’t fade into the background of dishes like white rice does. Once you switch to brown rice, there's no going back! Nutritionally, brown rice is far superior to white, which has had its valuable hull and germ removed.

Here are the basics on how to cook brown rice; there's not much to it!

First, always rinse rice well. Don't just run some water over it in a sieve — put it in a bowl with plenty of water and swish it around with your hands.

Combine in a medium saucepan with the water. Bring to a slow boil, then lower the heat, Cover (leave lid ajar) and simmer for 30 minutes, or until the water is absorbed. If the rice isn't tender to your liking at this point, add ½ cup additional water and continue to simmer until it's absorbed.

With this method you need not measure. Cooking rice this way is quite common, and actually traditional, in many Asian countries.

First, rinse well as instructed above. Combine the raw well rinsed rice with about 4 to 5 times as much water in a roomy pot. Or more — just not so much that the water will boil over. Bring to a rapid simmer, then lower the heat and cover (leave the cover slightly ajar). Simmer gently until the rice is done, 30 to 35 minutes. Drain in a fine sieve when rice is done. 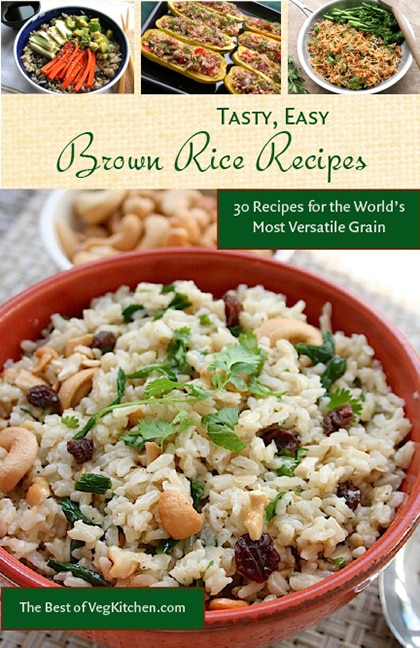 Our brown rice e-book
If you'd like to make more use of brown rice, and want easy, tasty recipes right at your fingertips, consider our Tasty, Easy Brown Rice Recipes pdf e-book, part of our affordable e-book series. With 30 of our most popular recipes and 20 full-color photos, you can print out this concise guide or view it right on your computer.

Brown rice is economical
When purchased in bulk, brown rice is very economical. It stores well for several months, provided that storage conditions are consistently cool and dry. I like to keep mine in mason jars. Most natural-food stores also offer organically grown brown rice at a slightly higher price.

The only drawback to buying brown rice in bulk is the occasional presence of mealworm eggs and the subsequent moths that hatch from them. If brown rice is left unrefrigerated during warm, humid months, it can become quite a hatching ground, sending annoying, yet perfectly harmless tiny gray moths flying out of your grain jar when opened. The way to minimize the problem is to rinse your rice very well in a fine sieve before cooking it and to refrigerate it during the summer. Be assured that distributors as well as retailers do their best to avoid selling buggy grains.

Nutrition Notes
Brown rice is high in fiber, low in fat, and very easy to digest. It provides a good range of the B vitamins, and minerals, notably phosphorus, calcium, and potassium. At 7½ percent protein, brown rice is not as high in protein as some other common grains, such as quinoa, millet, oats, and barley, but it's not insignificant.

To arrive at white rice, the bran, polish, and germ of the original rice grain are removed, leaving only the starchy white endosperm. White rice contains only about one-third of the vitamins and fiber, one-half of the minerals, none of the vitamin E, and 80 percent of the protein. To add some nutrition back in, white rice is often enriched, with iron and three B vitamins added back, but it's still a shadow of the overall nutritional value of whole brown rice. 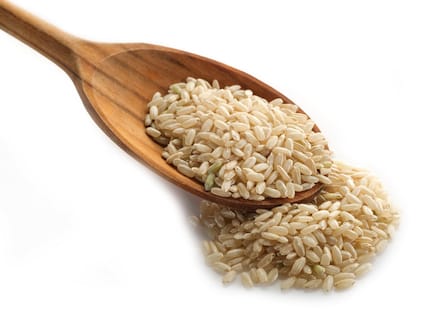 The Varieties of Brown Rice
Brown rice is available in a variety of forms, but the differences among the types are culinary rather than nutritional. When deciding which to buy, keep in mind how you plan to use the rice.

Medium-grain brown rice cooks to a fluffy texture like long-grain, but is slightly more tender and has more of a nutty, sweet flavor. Medium grain rice is also good as an all-purpose rice and works especially well in baked goods, griddle cakes, and as a stuffing for vegetables. 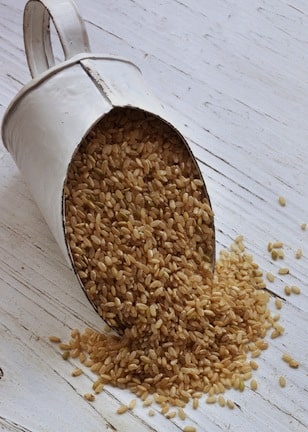 Short-grain brown rice, whose kernels are almost round, cooks to a denser, chewier texture and is sweeter than both long-grain and medium-grain brown rice. If it is cooked to more than a just-done consistency, it becomes sticky. It’s a great choice for using in rice puddings and, like medium-grain rice, may also be used in baked goods and griddle cakes.

Glutinous brown rice is a variant of short-grain rice. Its name refers to its texture and not literally to gluten, which it does not contain. Glutinous rice is a fairly common offering in natural-food stores as well as Oriental groceries (though in the latter, it is much more likely to be refined). Alternately called sweet rice or sticky rice, glutinous rice is a much-used staple in Japan and other Southeast Asian countries. It is used in the making of sushi, rice balls, sweet puddings, and mochi cakes. 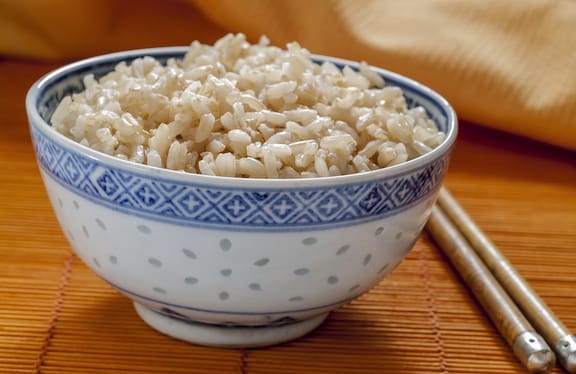 Brown Basmati is generally available in bulk and is a bit more expensive than ordinary brown rice, but not so much as to make it prohibitive. It is especially appropriate to use in Indian recipes, enhanced with aromatic spices. Basmati may be substituted in any recipe calling for long- or medium-grain brown rice. Cook it exactly as you would those types of rice.

If you're concerned about arsenic levels in rice, read some information and tips here. 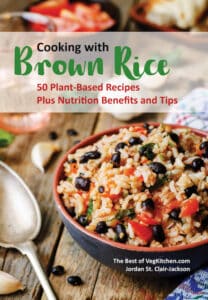