Eggplant and peppers, two companionable vegetables, are combined in a delicious casserole with a creamy, cheesy (vegan) topping. Serve with a simple grain or pasta dish (or serve over grains or pasta) and a colorful salad augmented by beans or chickpeas.

Preheat the oven to 350 degrees F.

Heat half the oil in a large skillet. Add the onion and garlic and sauté over medium heat until the onion begins to turn golden.

Sprinkle the flour over the vegetables and stir it in. Stir in the nondairy milk and cheese and continue to cook, stirring gently, until the liquid is thickened. Season with salt and pepper and cayenne or red pepper flakes to taste. 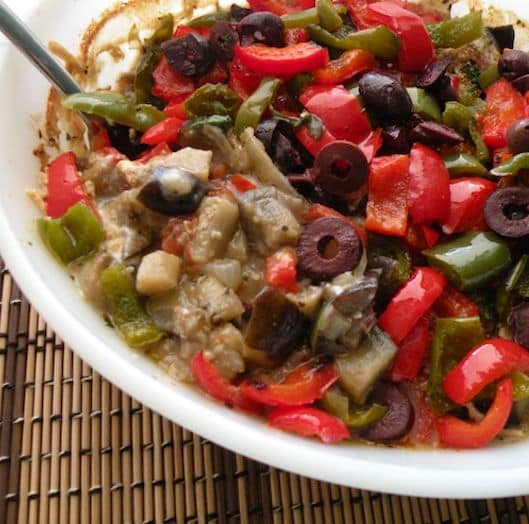 Bake for 30 to 35 minutes, or until the casserole is bubbly and the peppers are tender. Let cool for 5 minutes or so, then scoop out sections to serve. This is more of a soft casserole, it won't set up enough to cut squares or such.