"Korn has got one thing that nobody else has got," wrote nineteenth-century humorist Josh Billings, "and that is a kob." Equally indisputable is that the greatest gift the Native Americans gave the European settlers of Colonial America was the ability to cultivate corn. No other single food has had as great an impact on the development of American cookery. Since it grew well in poor soil and needed little skill to cultivate, corn quickly became a staple crop of the colonists.

You'll find a wide variety of recipes for fresh corn here on VegKitchen.

Corn and its derivatives, among them cornmeal, corn flour and hominy grits, appear as staples in every regional cuisine of the United States. The South boasts more than its share of classic recipes derived from corn, including hush puppies, corn bread and corn pudding.

Florida and California corn have extended the season for fresh corn in other areas. While it's often fairly good, it doesn't hold a candle to really fresh, just-picked corn. It's well known that the natural sugars in corn begin turning into starch soon after picking, and thus, the sweetest corn is that which can be purchased shortly after it is picked. Some varieties, are, of course, inherently sweeter than others—white corn is often sweetest, and the "butter-and sugar" (mixed white and yellow kernels) is another good choice. 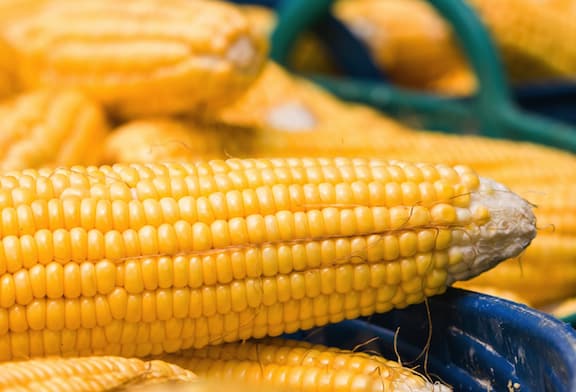 Corn local to your area is usually available until first frost, so take advantage of it all through September, and even into October or November in warmer areas, whether serving it straight on the cob, or incorporating it into salads, chowders, relishes and more. It's worth making the extra effort to use fresh corn kernels rather than frozen in recipes when it's abundant, as they yield more flavorful results and a pleasant texture if you take care to keep the cooking to a minimum.