Whether you have celiac disease, gluten intolerance, or just want to start cutting down, there’s no denying it — wheat is hard to avoid. But if you take the time to look, there’s a whole delicious world of pasta beyond the boxed durum wheat varieties. If you avoid gluten and are stuck in a pasta rut, try one of these gluten-free or low-gluten options. Pictured above, Cold Japanese Noodles with Daikon and Carrots, made with mugwort soba.

Buckwheat noodles (soba): These spaghetti-shaped noodles combine hearty-tasting buckwheat flour with wheat or whole wheat flour. If you are looking for a gluten-free soba, Eden Foods makes a 100 percent buckwheat version. Soba noodles found their way into kitchens all over the world by way of Japan, where they are typically served either chilled with a dipping sauce or in noodle soups.

Buckwheat variations (jinenjo soba, lotus root soba, mugwort soba): These soba noodles contain a mixture of wheat and buckwheat flour plus the ingredient for which they are named – Jinenjo (wild yam), lotus root, or mugwort. All of them are delicately flavored and, like typical soba, are generally served chilled or in soups. Unfortunately, it’s harder to find gluten-free versions of soba variations. Celiac or gluten-sensitive foodies might consider opting for Eden Foods’ gluten-free soba noodles.

Bean-thread noodles (also called cellophane noodles, harusame, saifun, mung bean noodles): Not to be confused with rice vermicelli, bean-thread noodles are made from mung bean starch and transparent once they’re cooked. They are reliably gluten-free. You can cook them by soaking in hot water before using them in Chinese stir fries, soups, or hot pots. Find them in two-ounce bundles at most grocery stores.

Rice vermicelli (also called mei fun, bifun) and rice noodles: These long, fine noodles made of white rice flour have the same mild flavor and tender texture of white rice. Like bean thread noodles, they are cooked by soaking in hot water, but they stay the same translucent white once they’re done. They cook in just a few minutes, and are very delicate. If you’re looking for an option with more structural integrity, try rice noodles, which are wider and flatter than rice vermicelli. Both are popular in Vietnamese and Thai cuisine.

Shirataki noodles: These no-carb Japanese noodles are made of water and the dietary fiber of elephant yam. They became more popular in the United States during the low-carb diet craze. Shirataki noodles, which get their name from the “white waterfall” they resemble, are long, thin, and have a gelatinous texture. They’re usually served in soups, but also do well in stir fries. You’ll find them at the grocery store in either dry packaging or in water. If you opt for the shirataki noodles that are packaged in water, rinse them well before cooking to get rid of the bitter taste. Shirataki noodles are gluten-free, so they should be celiac safe.

Kelp noodles: These thin, transparent noodles are made from seaweed and water. They’ve popped up in cuisines all over the globe, from Greece to China, but are known best for their use in Japanese cooking. Kelp noodles can be eaten raw in salads (and often are, by raw foodies), or in soups and stir fries. They’re a wonderful source of minerals with a unique, springy texture. Completely grain free, kelp noodles are a very safe choice for those with celiac.

Brown rice pasta: While certainly a boon to the wheat-intolerant, this cooks to a consistency and flavor more akin to mashed rice than to pasta, and is rather sticky. It’s certainly improved over the years, although critics agree that its texture remains gummy. Elbow shapes are most common. Brown rice pasta does best in creamy sauces. Try it with “alfredo” sauce or in a macaroni and “cheese.”

Corn pasta: Made of natural blends of corn flour, this wheat-free product allows those with wheat intolerance to enjoy traditional pasta dishes. The spaghetti tends not to hold up as well in cooking, but the small shapes such as shells and elbows do fine and have the slightly grainy texture and pleasant flavor of cornmeal. The jury is still out, however, on whether corn is safe for those with celiac disease. Studies have shown that it causes inflammation in some patients. Celiac and gluten-intolerant pasta enthusiasts might consider talking it over with their doctor before sampling. 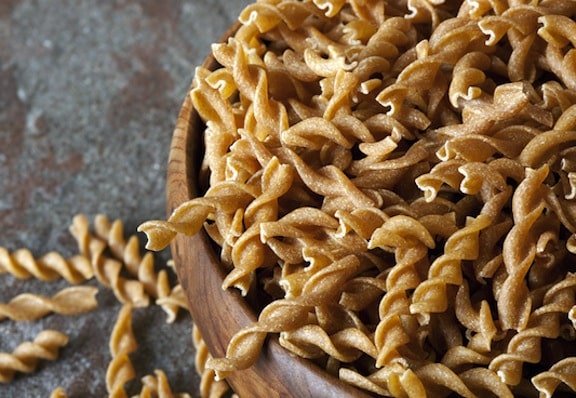 Italian-style gluten-free pasta: There are plenty of gluten-free pastas made with traditional Italian dishes in mind. These pastas, found in the Italian food aisle alongside the white-flour pastas and jarred sauces, are typically made with some combination of rice and corn flour. They tend to hold up better than pure brown rice or corn pasta if your aim is for a gluten-free option that most closely resembles typical wheat pasta. Barilla is the most popular brand, but Bonta’d Italia is also popular with the gluten-free set.

Quinoa pasta: There are a few brands of traditional Italian pastas made with a combination of quinoa and corn flour – Ancient Harvest is a standout. This pasta holds up better, consistency-wise, than brown rice or corn pasta, especially if you cook it with a bit of oil and rinse it in cold water immediately after cooking. Although it’s marketed as quinoa pasta, it is made with corn flour, so the same cautions to celiac and gluten-intolerant diners apply.

A word to the wise: Any variety of pasta listed here that is made of rice or corn will continue to absorb sauce or broth after it’s cooked. So, always cook it al dente, and save your leftover pasta in a separate container from the sauce or soup it’s served with.

And just to reiterate, if you're unsure about the suitability of any of these pastas, please consult with your doctor or Registered Dietician.