Nasu Dengaku is a traditional preparation of Japanese eggplants that broiled (or grilled), spread with a sweetened miso mixture, and then broiled again for a few seconds. The results are creamy, smoky eggplant with a sweet and salty sauce. You’ll notice that my recipe contains agave nectar, which is hardly a traditional Japanese ingredient. You can substitute sugar or another natural sweetener, but you may need a little more because agave is sweeter than sugar and much sweeter than, for example, rice syrup or barley malt syrup.

Stay away from maple syrup or any sweetener that’s strongly flavored, though; the sweetener’s just there to sweeten, not to deliver any flavor. Recipe and photos contributed by Susan Voisin, FatFree Vegan Kitchen.

Serves: 4 as an appetizer

Place the mirin and saki in a small saucepan and bring to a simmer over medium heat. Simmer for about 2 minutes to allow some of the alcohol to cook off. Then add the miso and stir until smooth. Stir in the agave nectar, reduce the heat to very low, and continue to cook, stirring occasionally, while you broil the eggplants:

Brush the cut sides of the eggplants with the sesame oil, if desired. Put the eggplants cut-side down on a baking sheet and place under the broiler of your oven for about 3 minutes, checking often to make sure that they do not burn. Turn them over, and cook for another 3 minutes or until the tops are a light to medium brown. Do not burn!

When the eggplants are tender, top each one with the miso sauce and put them back under the broiler until the sauce bubbles up—this should take less than a minute, so watch them closely. Serve hot, sprinkled with toasted sesame seeds and green onions. 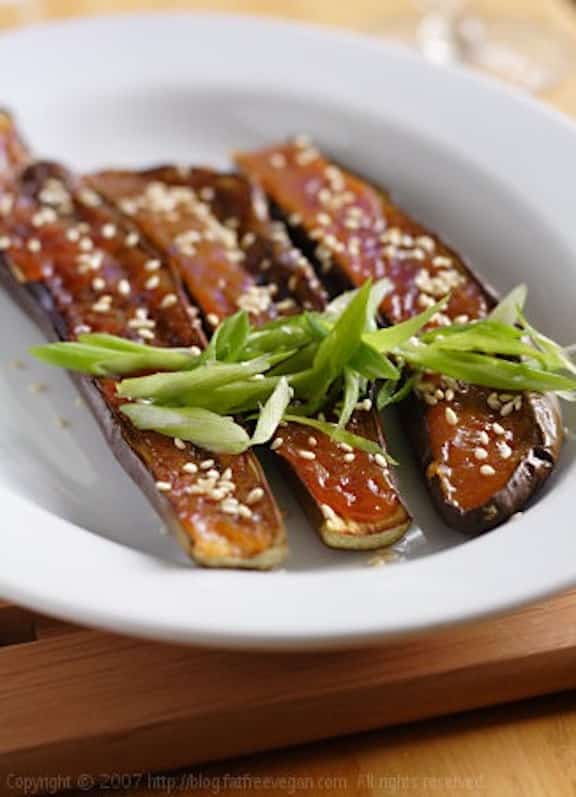