[Reprinted from The Book of Veganish by Kathy Freston & Rachel Cohn ©2016, by arrangement with Pam Krauss Books, a member of Penguin Group U.S., a Penguin Random House Company.] As you move toward a plant-based diet, the main concern you will hear from family and friends who aren’t vegan or vegetarian is, “But how will you get enough protein?”

I hear that all the time and I get it, because protein is such a major buzzword these days—we seem to have an obsession with it in our culture. You’ll hear it from the high-protein, low-carb gang, and even dietitians and doctors who mean well.

Granted, those folks are right in that we shouldn’t be eating all the refined junky carbs and sweet stuff we’ve been peddled for years, and high-protein, low carb advocates are certainly right to steer us away from dairy, but they go too far when they tell us to focus so hard on protein, protein, protein.

Obviously we need protein, but we shouldn’t be obsessed with it.
Protein is simply a macronutrient found in just about all foods to varying degrees. Health enthusiasts have gotten into a dangerous habit of breaking down food into its component parts rather than looking at things as a whole. By doing that, we miss the complete picture.

Despite what the meat and dairy industries want us to believe, animal products are not the sole or even the best source of protein. The important thing, says the Harvard School of Public Health, is to consider the “protein package” — as in what else comes along with the protein. In the case of meat, dairy, and eggs, you get saturated fat, cholesterol, and zero fiber —  and that kind of diet is strongly associated with obesity, type 2 diabetes, heart disease, and certain types of cancer. Those are the primary killers of our time!

Studies support plant-based protein.
It’s not just Harvard saying that (and certainly not just me!). This finding is supported by nearly every large-scale scientific study of eating habits from around the world. When researchers compare people with meat-rich diets to people who eat very little meat, it’s always the same: Meat eaters are fatter and sicker and don’t live as long as the plant-based eaters. Watch the documentary Forks Over Knives or read Proteinaholic by Dr. Garth Davis to better understand the protein spell we seem to be under.

Probably the best and most widely published gold-standard, peer-reviewed studies that looked at hundreds of thousands of people are the Adventist Health Studies, which you can easily find online if you want to see the science right in front of you.

Now to the positive side of the equation.
You can get all the protein you need by eating plant-based foods, plus you get tons of fiber, healthy nutrients and antioxidants, zero cholesterol, and not much fat at all. But, okay, let’s be really specific and answer that question of where you’re going to get your protein, because I promise that you will be asked this all the time. Let me acknowledge first that you actually can end up short on protein if you’re not paying attention—not enough to deem you medically deficient, but enough to leave you feeling dissatisfied or hungry between meals.

If you don’t give any consideration to protein at all, and just eat pasta or salads, you’re going to feel hungry and maybe even weak. You need beans. You need nuts. You need enough calories from whatever whole foods you’re eating to hit your mark. 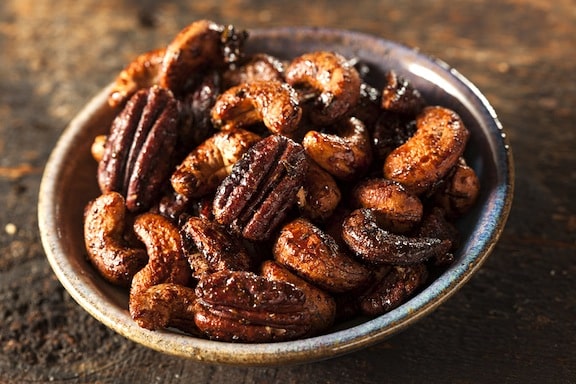 So how much protein do you actually need?
The recommended daily protein intake per day for an adult man is about 56 grams, and for an adult woman about 46 grams.

You will get those protein grams from beans like fava, black, kidney, and white beans; and black-eyed peas, chickpeas, and lentils. You get it from seeds like sunflower, flax, hemp, chia, pumpkin, sesame, and quinoa (which people think is a grain but is actually a seed). You supercharge your intake of protein by eating whole nuts like peanuts, cashews, almonds; and in delicious nut butters like peanut butter, almond butter, cashew butter, and tahini (a sesame seed paste used along with chickpeas to make hummus). 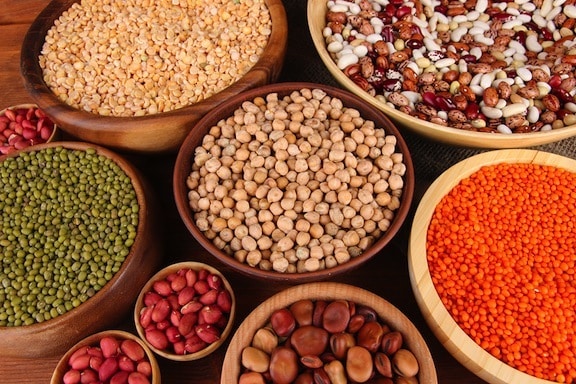 Protein is also abundant in soy products like tofu and tempeh or in meat substitutes like seitan (wheat protein) or veggie sausage or “chick’n.” You’ll also get it from all kinds of veggies like kale and broccoli. It’s in your pasta and rice, and in just about everything you eat that isn’t super-processed.

And while we’re on the subject of protein, let’s also talk meat alternatives for a minute, because I often hear, “Oh, but they aren’t natural and I don’t want to eat fake foods!” Cool, you don’t have to. But meat substitutes are a fantastic way to transition away from animal foods and get that protein everyone is always so worried about. Some health sticklers are down on fake meats, but sometimes they scratch an itch that beans or kale just can’t. Every once in a while, I feel like I need that traditional meal of turkey and mashed potatoes. Rather than fight it, I’ll have “turkey” made from whole grains and plant-based proteins, served with a big old pile of mashed potatoes, and I get my fix. 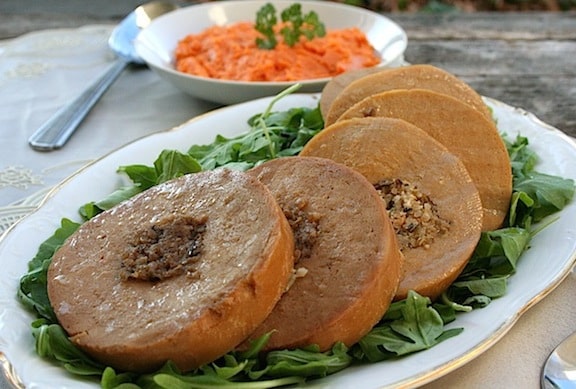 If I’m at a barbecue with friends, I don’t want to be eating a bowl of rice and beans while everyone else is filling up their buns, I want a hot dog! I want a burger! So I’m glad there are delicious veg-based burgers and sausages I can slap on the grill and load up with pickles, ketchup, and onions like everyone else. I just don’t make them the core of my diet or my main source of protein.

If I’m working out hard and I don’t have the time or energy to shop and prepare a real meal with plenty of protein to support my active day, I make a protein smoothie. Since I tend to work and work out hard, I make a smoothie almost every day. It’s a shortcut, but it works. Find your favorite vegan protein powder and blend it up with some coconut water or soy milk, throw in some peanut or almond butter and some fresh or frozen fruit and voilà, you’ll feel satisfied! Oh, and I always throw in a handful of frozen greens for some extra nutrition.

So, long story short, there’s a bunch of different ways to get healthy protein, and you can get it by eating a rich variety of lots of different healthy foods!