For this bountiful vegetable soup, the less cooking time, the better. Featuring an of green veggies, including broccoli, zucchini, peas, and spinach — plus fresh herbs — everything should remain bright green and just done. The addition of a small amount of couscous or quinoa make this soup more substantial without adding cooking time.

If using couscous, combine it in a small heatproof container, with 1 cup boiling water. Cover and set aside for 10 minutes, then fluff with a fork.

If using quinoa, combine with 1cup water in a small saucepan; bring to a rapid simmer, then turn down the heat, cover, and simmer gently until the water is absorbed, about 15 minutes. If the grain isn't completely tender, stir in an additional ½ cup water and simmer until absorbed.

Meanwhile, combine the vegetable broth with 2 cups water in a small soup pot and bring to a simmer.

Add the zucchini or celery (peel the celery stalks to remove strings if you'd like), peas, broccoli, scallions, and ginger. Return to a rapid simmer, then cover and cook 3 to 4 minutes, or until the vegetables are just done.

Stir in the soy sauce, oil, spinach, parsley, and dill. Cook for another minute or two, just until the spinach has wilted.

Stir in the couscous or quinoa. Season with pepper, and if desired, additional soy sauce. Serve at once. 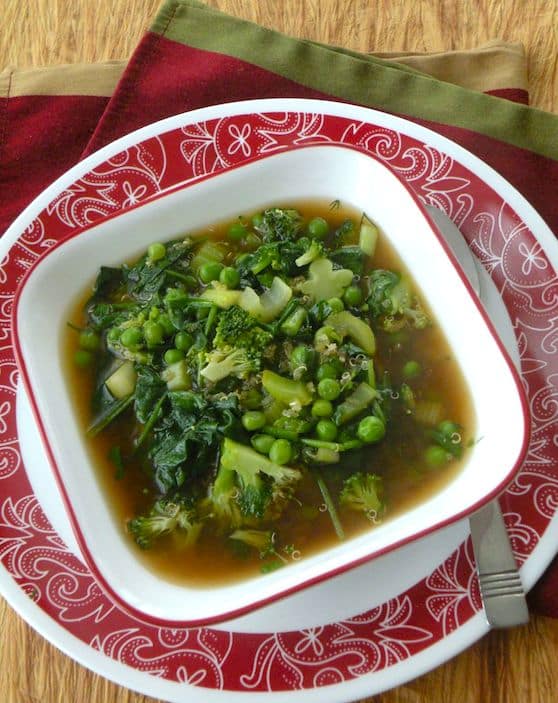