This article is courtesy of The Whole Grains Council and Oldways.

Lillian Abugoch James of the University of Chile reported on the composition, chemistry, nutritional and functional properties of quinoa. She cited the pseudocereal’s “remarkable nutritional qualities” including its high protein content (15%), “great amino acid balance,” and “notable Vitamin E content.” Beyond its nutritional profile, Abugoch recommends quinoa to food manufacturers because of its useful functional properties, such as viscosity and freeze stability. (Advances in Food and Nutrition Research, October 2009; 58:1-31)

Quinoa Possible Dietary Aid Against Diabetes
Scientists at the Universidade de São Paulo in Brazil studied ten traditional Peruvian grains and legumes for their potential in managing the early stages of Type 2 diabetes. They found that quinoa was especially rich in an antioxidant called quercetin and that quinoa had the highest overall antioxidant activity (86%) of all ten foods studied. Coming in a close second in antioxidant activity was quinoa's cousin, kañiwa. This in vitro study led the researchers to conclude that quinoa, kañiwa, and other traditional crops from the Peruvian Andes have potential in developing effective dietary strategies for managing type 2 diabetes and associated hypertension. (Journal of Medicinal Food, August 2009; 12 (4):704-13.) 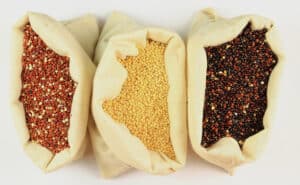 Quinoa, Oats, and Buckwheat: More Satiating
A University of Milan study compared buckwheat, oats, and, quinoa to see if any of them showed promise in helping with appetite control.  In three experiments – one for each grain – subjects’ satisfaction and subsequent calorie consumption were compared, after eating the study grain and after eating wheat or rice. All three study grains had a higher Satiating Efficiency Index (SEI) than wheat or rice; white bread was in fact lowest in appetite satisfaction. Unfortunately, even after feeling fuller from eating the study grains, the subjects did not cut their calories at the next meal! (British Journal of Nutrition, November 2005; 94 (5):850-8.)

Better Lipid Effects From Quinoa
Also at the University of Milan, researchers compared the digestibility of various gluten-free foods in the lab (in vitro) and then with a group of healthy volunteers (in vivo). Their goal was to gauge the effect of the different foods on postprandial glucose and insulin response, as well as to measure triglycerides and free fatty acids after eating.  Quinoa stood out in the study, for producing lower free fatty acid levels and triglyceride concentrations than other GF pastas and breads studied. (European Journal of Nutrition, August 2004; 43 (4):198-204. Epub 2004 Jan 6.)