When you need a grain to cushion stews and stir-fries, to stuff into vegetables, or to power pilafs, chances are you reach for rice. And while there's nothing wrong with rice—particularly if you've made the switch to brown—exploring a variety of whole grains can expand your culinary horizons and add even greater nourishment to your meals.

Whole grains are particularly compatible with fall and winter produce. Often distinctively flavored and textured, these grains hold their own with a variety of hardy produce like squashes, eggplant, cauliflower, greens, and more.

Apart from adding character to meals, whole grains are superb sources of fiber and protein, while remaining blessedly low in fat. Because the bran and germ are left intact, they also are fine sources of B vitamins, vitamin E, and an array of minerals.

It would certainly be possible to be health-conscious and never eat millet or quinoa. But why miss out on one of the richest sources of sustenance available? If you aren't using whole grains simply because they're foreign to you, let this guide get you started. And if you are already a whole grains fan, read on for tips and techniques. Explore the following topics for lots of hearty recipes: 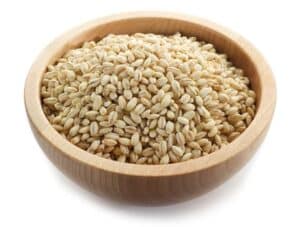 The pearl variety of barley is tasty and versatile, but you may want to try pot barley for greater nutritional impact. Pearl barley loses half its vitamin and mineral content and much of its fiber when its bran and germ are removed. Pot barley undergoes just enough "pearling" to remove the tough hull. It's a chewy, mild-tasting grain that's every bit as versatile as it is in its more refined form. Use as a change-of pace from rice as a bed of grains, or in pilafs and casseroles; in soups, hot or cold; and in marinated grain salads.

Cooking: Use 3 to 3 ½ parts water to 1 part grain. Bring the water to a simmer in a saucepan, then stir in the grain. Simmer gently but steadily, covered, until the water has been absorbed, about 45 to 50 minutes. 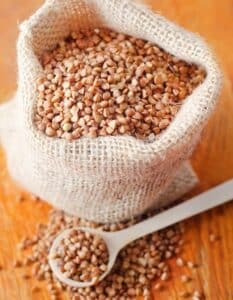 These toasty-brown, pyramid-shaped seeds, sometimes marketed as "kasha," come from a plant related to rhubarb. In both groat and flour forms, buckwheat is far more extensively used in Near Eastern, Asian, and Eastern European cuisines. Bold-flavored and aromatic, it combines well with sauteed onion, celery, cabbage, and fresh herbs. It make a good grain for stuffing winter squashes and other vegetables, and is often used in Jewish specialties. Groats come in fine, medium, and coarse grinds, which varies their cooking times.

Cooking: Use 2 parts water or vegetable stock to 1 part grain. Bring the liquid to a simmer in a saucepan. Meanwhile, heat 1 tablespoon oil for every cup groats used in a large heavy skillet. Add the groats and stir quickly to coat with the oil. Toast over medium heat, stirring frequently, until they darken further and become very aromatic, about 4 to 5 minutes. Pour the liquid over them and cover. Simmer gently until the liquid is absorbed, about 15 to 25 minutes (depending on the grind). 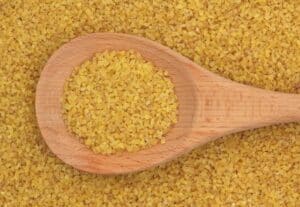 Made from parboiled, dried and cracked wheat berries, bulgur is chewy, hearty, and versatile. Perhaps best know as the base for the tasty grain salad tabouli, bulgur also makes great pilafs; it combines well with nuts and dried fruits, and with beans and fresh herbs. It may also be used in casseroles and as a replacement for rice in many dishes.

Cooking: Use 2 parts water to 1 part grain. The traditional way to cook bulgur is to pour the boiling water over it in a heat-proof container, then cover, and let stand for 30 minutes. If you need it cooked more quickly, bring water to a simmer in a saucepan. Stir in the grain, then cover and simmer gently for 15 minutes, or until the water is absorbed. 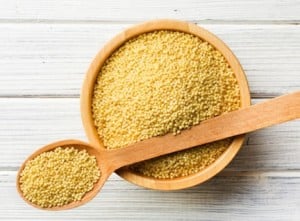 This small round yellow seed is nourishing and versatile, with a mild flavor and a slightly mushy texture. While it is most welcome on the dinner table, you might also consider it a good choice as a hot cooked cereal embellished with honey, chopped nuts, dried fruit, and non-dairy milk (soy or coconut)—especially if you cook it the night before. Because of its cohesive texture, millet works well in casseroles and souffles, and as a stuffing for vegetables.

Cooking: Experiment with different water-to-grain ratios to vary the texture. Use 2 ½ to 3 ½ parts water to 1 part grain. The less water used, the drier the result; more water will yield a porridge-like consistency. Bring water to a simmer in a saucepan, then stir in the grain. Simmer gently but steadily, covered, until the water has been absorbed and the grains have burst, about 35 to 45 minutes. Millet's flavor is enhanced by toasting the grains in a dry or lightly oiled skillet for 4 to 5 minutes before cooking. 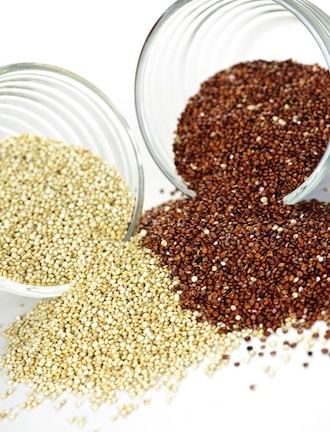 Quinoa is a rediscovered "superfood" that was once a staple crop of the South American Incas. Small and sand colored grain, its nutritional profile makes quinoa a standout, with exceptionally high-quality protein and a wide range of minerals. Quinoa is also a culinary delight, cooking to a fluffy texture in just 15 to 20 minutes, with a light yet unique flavor. Try red quinoa, now widely available, for a eye-pleasing change of pace, or combine the golden and red in equal parts. Use it as a bed of grains for bean and vegetable dishes, in pilafs, and grain salads.

Cooking: Rinsing well in a fine sieve is often recommended to rid the grain of a slight bitterness. Bring the liquid to a simmer in a saucepan. Use 2 parts water or vegetable stock to 1 part grain. Stir in the grain, then cover and simmer gently for 15 minutes, or until the water is absorbed. If you'd like a more tender grain, add ¼ cup more liquid and let it cook until absorbed. Like other grains, the nutty flavor of quinoa is enhanced by toasting it lightly in a dry or lightly oiled skillet for about 5 minutes before cooking. 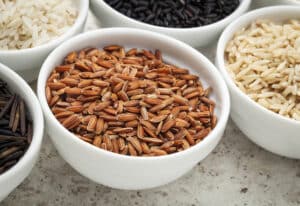 It might be the most ordinary of the grains presented here, but there's nothing wrong with that—whole rice varieties are delicious and versatile. White rice might be right for special treats like sushi, risotto, and rice pudding, but in general, stick with the unpolished varieties, which are nuttier, more aromatic, and of course, far more nutritious. Brown rice comes in several kinds of grain — long, medium, and short. One notable variety is brown Basmati, which is particularly aromatic. And don't stop as brown rice; try the various rice blends available in packages, as well as Butanese red rice, and forbidden black rice. The latter is a favorite of mine. I love the dramatic color and extra-nutty flavor. And as icing on the cake, it's filled with antioxidants.

Cooking: The amount of water used varies depending on the size and variety, so it's safest to start with 2 parts water or vegetable stock to 1 part grain, so you don't end up with a sticky result. Bring the liquid to a simmer in a saucepan. Stir in the grain, then cover and simmer gently for 30 to 35 minutes, or until the water is absorbed. If the rice isn't done to your liking, add ½ cup additional water, simmer until absorbed, and repeat as needed. 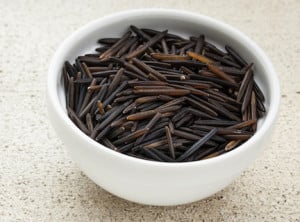 A true native of North America, wild rice is unrelated to rice. It's technically not a grain, but rather the seed of a tall, aquatic grass. The distinctive flavor of wild rice goes a long way; it is commonly paired with brown or white rice and used as a base for flavorful pilafs and marinated salads. Great embellishments for wild rice include fresh herbs, celery, nuts, and dried fruits.

Cooking: Use 3 to 4 parts water to 1 part grain, depending on how chewy you like it. Bring the water to a simmer in a saucepan, then stir in the grain. Cover and simmer gently for 40 to 45 minutes, or until the water has been absorbed. 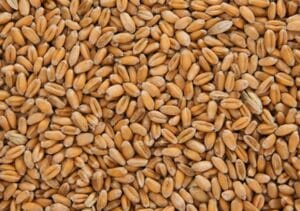 The whole kernels, or groats, of many types of grains are available in well-stocked natural foods stores. You can choose from among whole oats, wheat, triticale, spelt, kamut, and rye. With all their whole-grain goodness still intact, they have a warm, nutty flavor and chewy texture. Try tossing a handful of cooked whole-grain berries into salads and soups; combining them with lighter grains in pilafs; adding them to bread dough, and garnishing noodle dishes with them.

Cooking: Use 4 parts water to 1 part grain. Bring the water to a simmer in a saucepan, then stir in the grain. Simmer gently but steadily, covered, until the water has been absorbed, about 50 to 60 minutes. At the end of cooking time, if you'd like them more done, add an additional ½ cup of water and cook until absorbed; repeat until done to your liking. Presoaking whole-grain berries in a covered saucepan with water that has come to a simmer can cut down on cooking time.