When you open your pantry, do images of the rugged mountains of South America, the colorful tablelands of Africa and the fertile river valleys of the Middle East dance before your eyes? If not, you have yet to discover amaranth, quinoa, spelt, kamut and teff, the quintet of nutritional powerhouses known as the ancient grains. The legends behind their origins many millennia past, their loss over time and their ultimate modern revival literally tell the story of civilization. Another great ancient grain to discover (or rediscover) is einkorn.

The description of grains as "the staff of life" is particularly apt applied to the ancient grains—civilizations past relied on them as their major source of protein and other nutrients. In fact, their superb nutritional qualities are the most compelling reason agricultural entrepreneurs persistently labored to revive them for today's market.

Chances are that consumers will enjoy these superb grains in prepared products (such as breads, other baked goods, cereals and pastas, in which their use is exploding) more so than by using the grains themselves. But for those who would like to get acquainted with these unique grains, read on. 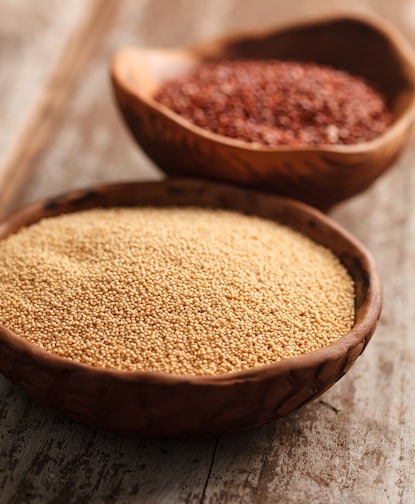 AMARANTH: For 5,000 years, this poppy seed sized grain, a botanical cousin to quinoa, was a revered crop of the ancient Incas of South America and the Aztecs of Mexico who honored amaranth as "the food of the gods."

Perceiving that amaranth was central to the Aztec culture, Cortes decreed that anyone caught growing the grain would receive the death penalty, effectively eradicating its use for centuries. Amaranth's considerable agricultural promise lies in its resistance to drought and cold and its nutritional value.

It has a nutty and somewhat sweet flavor and works best where a cohesive texture is desirable—in spoon bread, casseroles, and savory loaves or as a hot, hearty breakfast porridge. Leftover cooked amaranth can be added in small quantities to muffin and quick bread recipes (¼ to ½ cup per average recipe) for added texture and moistness.

QUINOA: Traditionally grown in the Andes, quinoa bears small, tan, disk shaped grains about the size of sesame seeds. Quinoa is the Quechua Indian word for mother—reflecting the reverence bestowed on it as "the mother grain." Much of the quinoa now produced for domestic consumption is grown in the Rockies.

The agricultural history of quinoa and amaranth are remarkably parallel. Quinoa also measures up to its cousin nutritionally but yields a fluffy texture with a distinct flavor and aroma that's perfect for pilafs, cold salads, casseroles, as a bed for vegetable and bean dishes, and as a sweet pudding. Rinse well before cooking to ensure no bitter taste. We have lots of tips on how to cook and use quinoa on VegKitchen.

SPELT: Spelt is believed to be among the most ancient of cultivated wheats. Its recorded use has been most prevalent in Europe, where it goes back about 9,000 years. It remained in use in tiny, persistent pockets of Europe until its popularity began to grow at the turn of the century.

High in fiber and easily digested, spelt is being promoted as a wheat that may be better tolerated by people with gluten intolerance and wheat allergies. Spelt’s flavor and aroma is as familiar as whole wheat, yet richer and more complex. It makes great pastas.

KAMUT: A relative of durum wheat, kamut was a staple in the Nile region 6,000 years ago, until the conquering Greeks supplanted it with their favored red durum. It was all but lost to history until the 1970s, when an enterprising Montana wheat farmer bred it back from extinction and named it kamut, an ancient Egyptian word for grain.

Like spelt, it is being recommended as less allergenic than common wheat. Its flour, though unrefined, is fine and powdery, resulting in light-textured pastas and baked goods. The flavor of kamut grain, rolled grain, pasta and baked goods is also very light, with a slightly buttery flavor and a pleasant aroma. 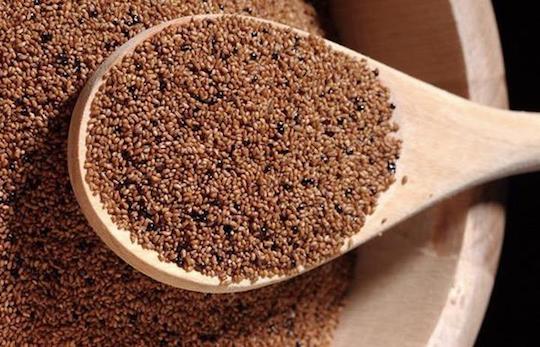 TEFF: Teff doesn't share the lost-and-found histories of its fellow ancient grains. It has been a persistent, reliable crop of Ethiopia for thousands of years, probably because it is extremely drought-resistant. The world's tiniest grain, five or six teff kernels fit on a pin head. For domestic consumption, teff is now being grown in Idaho.

Cooked teff grains have a strong, distinct flavor and aroma, somewhat reminiscent of molasses, and a dense, gelatinous texture. Thus, it's most commonly used in porridges, puddings, pancakes and baked goods. Teff can also be incorporated, uncooked or slightly moistened, into baked goods and stews.