Like grapes, black pepper grows on perennial vines. But pepper vines soar to a height of 30 feet or more—you can see them trellising swaying palm trees in the state of Kerala on India’s Malabar coast, where black pepper is big business and pepper vines are everywhere. Excerpted from Healing Spices* by Bharat B. Aggarwal, PhD, Sterling Publishing, 2011. See VegKitchen's review of Healing Spices.

The vines have large, shiny leaves with spiky extensions called catkins that fill with peppercorns, the fruit of the pepper vine. A catkin full of peppercorns is a twisty stalk densely packed with what looks like shiny beads.

After peppercorns bud, they gradually turn dark green—the sign that they’re ready to be picked and dried.

As peppercorns dry, the peppercorn’s outer layer (called the pericarp) turns thick, rough, oily, and black. At this point, the peppercorn is pepper—warm, penetrating, full-bodied, with lingering heat.

But not all peppercorns that you find in the market are black.

Green peppercorns (which became all the rage in the 1970’s, with the popularity of French nouvelle cuisine) are unripe black peppercorns that have been plunged into boiling water, which inactivates the ripening enzymes and stops them from turning black. They have a fresh, hot bite but are much more subtle then the black. You can eat them whole and still smile!

Pink peppercorns have been left on the vine, turning from green to yellow to ripened red. They they’re picked and sold as so-called pink peppercorns. Like white, they’re considered a gourmet spice. They’re aromatic, with a benign and subtle flavor.

Piperine is found in all the peppercorns, but it’s most abundant in black pepper. And there’s a lot of black pepper out there.

Next to salt, pepper is the world’s most frequently used spice. It is an ingredient in about 95 percent of recipes, and you can find it on almost every table in America. And no wonder—it offers a “bite” not found in any other spice. Even restaurants that consider salt an insult to the chef will offer pepper, usually freshly ground at tableside.

In the Kitchen with Black Pepper 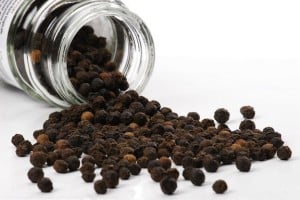 Black pepper is the most useful and indispensable of all culinary spices. When faced with a plate of uninspiring food, the judicious grind of a peppermill can salvage a meal.

The robust flavor of black pepper is most closely associated with strong-flavored food. Apply liberally to beans and lentils. Use it lightly on more delicate food. You can put black pepper on anything, even fruit. Berries, apples, and pears take well to a grind of fresh black pepper.

Keep white peppercorns on hand for those times you want to give a dish a pepper bite without an overpowering pepper fragrance.

And you should always add pepper to liquids and sauces at the last minute. If added early in cooking, it loses its aromatic fragrance and can leave bitterness that is hard to erase. Keep black peppercorns in a metal, plastic or glass peppermill, not wood. Wood will leach pepper of its volatile oils.

Here are a few ways to get more black pepper into your diet: