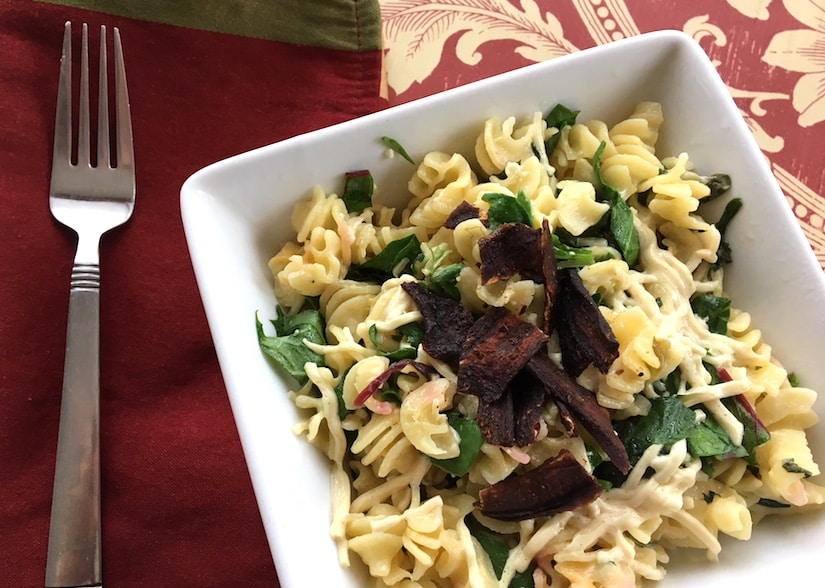 My name is Gloria Clay, and I won Vegan Outreach Mac Down Competition in Columbia SC. I was the only person who isn’t chef or an owner of a food truck or restaurant. I’ve never gone to culinary school, so I was surprised and thrilled to win the competition with my original Vegan Mac and Cheese Casserole with a healthy dose of collard greens, and topped with tempeh bacon.

I entered the competition to bring awareness to cruelty free eating and to let people know that they can still enjoy their favorite comfort foods without the use of animal products.

The inspiration behind my winning mac and cheese begin with my husband Adam who is not a vegan yet, but working very hard toward it. A week before the competition I cooked both sides of collard greens and mac and cheese (vegan, of course). I asked if he wanted to try them, and he said sure. After eating them, he said, “Gloria, I could eat this three times a week.”

I figured out how to turn these two vegan sides into what I now call “Adam’s Vegan Mac & Cheese Collard Green Bake” named for my husband, who was the inspiration behind the recipe.

Cook the tempeh bacon in a large skillet over medium heat until crisp, about 3 minutes per side. Remove bacon, chop up and set aside.

Pour the broth into skillet and let come to a full boil. Add the greens in batches, and cook for about 4 minutes, or until wilted.

In a large pot, bring water to boil. Add pasta and cook according to package direction. Drain and set aside.

In the meantime, melt the melt vegan butter in a medium skillet. Over medium heat, sprinkle in the flour and whisk until well combined. Cook for 2 to 3 minutes. Slowly add the nondairy milk, continue to whisk until the sauce begins to thicken.

Stir in the cheeses, a bit at a time, until melted and sauce is smooth. Season to taste with hot sauce, salt, and pepper.

To assemble: Transfer half of the noodles to a 9” x 13” (vegan) buttered baking dish.  Pour on half of the cheese sauce and then the collard greens. Repeat.  Sprinkle the reserved shredded cheese on top.

Bake for 35 minutes.  During the last 5 minutes of the cooking process, turn off the oven and top with the chopped bacon and place back into oven. Let set for 5 minutes remove from oven, then serve and enjoy!

Note: To save time, I used the bagged kind of collard that are already chopped and washed, that is located in the produce section of well-stocked supermarkets.

About Gloria: I was born and raised in Bennettsville, South Carolina, a small rural farming community.  As a child growing up, my “meat” would always be the last thing I would eat. I’m married, have four grown sons and three grandchildren. I have been a Certified Nursing Assistant for over twenty years and currently work on the Neuroscience Unit. I cook from my soul, to feed the souls of others.

I have been a vegan now for almost 2 years and I will never go back to eating another animal or use animal products. My transition to veganism came over night. One morning I got up to make my egg and cheese sandwich like I have for years. I started cooking the eggs and literally had gotten sick to my stomach from the smell of it. So that morning, I went vegan! During my transition I thought about the numerous times I went to the grocery store and picked up meat to add to my menu and I begin to cringe.

I said to myself, “This is not how we should treat another living being.” Then the image of Noah’ Ark came to me.  The animals walked side by side, and that’s how I believe we were intended to walk with the animals — side by side, and not on our plates!

I have always had compassion and caring for others.  I love to cook and bake in my leisure time. If I knew the things I know now about eating vegan,  I would have raised my children as vegans well. 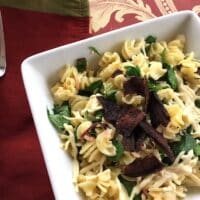