For years, my mom has been making a dairy-based version of classic turtle cookies for the holidays. Several years ago we decided to create a vegan version, which is as good as—or maybe even better than—the original recipe. Recipe and photo from Jazzy Vegetarian Classics: Vegan Twists on American Family Favorites by Laura Theodore, reprinted by permission.

Preheat the oven to 350 degrees F. To make the crust, put ½ cup vegan margarine, 1 cup brown sugar, and flour in a high-performance blending appliance and process until particles are fine, forming a loose dough. Pour into a nonstick, ungreased 8 x 12 inch baking pan. Press the dough into an even layer, using your hands. Arrange the pecan halves evenly over the unbaked crust.

To make the filling, put ⅔ cup vegan margarine and ½ cup brown sugar in a small sauce pan. Cook over medium-low heat, stirring constantly, until the sugar dissolves and the mixture starts to bubble. Pour the hot filling over the pecans and crust. Bake on the center rack of the oven for 18 to 20 minutes until the pecans are slightly golden. 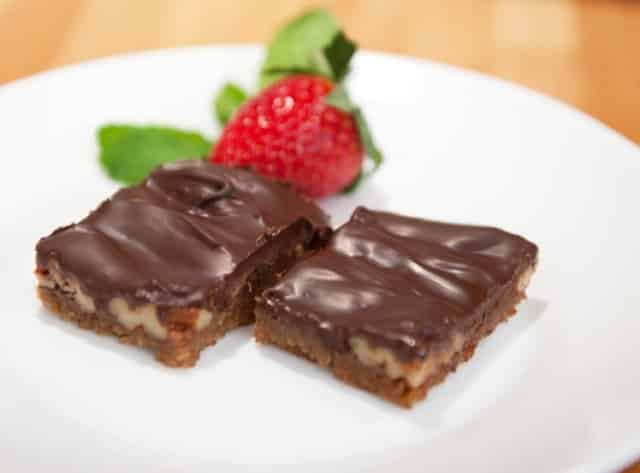 Cool for 30 minutes and cut into 16 to 20 cookie squares. Stored in an airtight container in the refrigerator, the cookies will keep for 4 days.