A small amount of vegan cream cheese gives these stuffed potatoes a rich flavor. Serve them with a big tossed salad with chickpeas or beans, and steamed green beans or asparagus, or other favorite green veggie. Photos by Evan Atlas.

Bake or microwave the potatoes until done but still firm. When cool enough to handle, cut each in half lengthwise. Scoop out the inside of each potato half, leaving a sturdy shell, about ¼ inch thick all around.

Transfer the scooped-out potato to a mixing bowl and mash it coarsely. Stir in the cream cheese.

Heat the oil in a medium skillet. Add the onion and sauté over medium heat until golden. Add the mushrooms, cover, and cook until they are done to your liking, stirring occasionally.

Combine the mushroom mixture, liquid and all, with the mashed potato in the mixing bowl. Season with salt and pepper and stir well to combine.

Stuff the mixture back into the potato shells. Heat as needed in the microwave or in a preheated 400-degree oven. Garnish each potato half with a little parsley and a sprinkling of paprika, and serve. 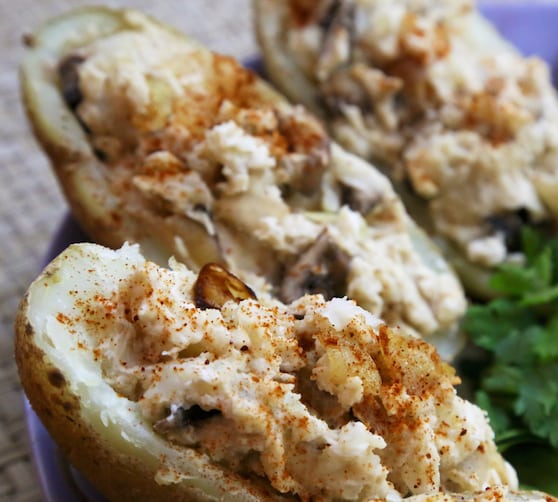