They may sound complicated, but these Pastry-Wrapped Seitan Roulades with Spinach-Mushroom Duxelles are actually very simple to make. These roulades are bursting with healthy ingredients and savory flavor.

Although this recipe involves a few steps, it can be assembled ahead of time—and the delicious results are well worth the effort. This savory roulade is sure to wow even the most snooty of eaters. Serve it alongside a light salad, some tangy pasta, or even mashed potatoes.

Full directions for how to make Pastry-Wrapped Seitan Roulades with Spinach-Mushroom Duxelles are in the printable recipe card at the bottom of the post.

Seitan is a popular vegan and vegetarian meat substitute. It's made from wheat gluten, giving it a stretchy, "meat-like" texture. It doesn't have a super strong flavor on its own, which makes it great for adding seasonings and sauces.

Duxelles are mushrooms that have been sautéed with other veggies and used to make a sauce or stuffing. The classic definition includes veggies like onions, garlic, and parsley, but our version is made with onions, spinach, and a ton of spices! 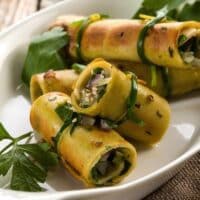 This recipe is from Party Vegan: Fabulous, Fun Food for Every Occasion* by Robin Robertson © 2010, published by John Wiley & Sons.

Robin Robertson is the author of numerous cookbooks, including Fresh from the Vegetarian Slow Cooker* and many other titles.* Visit Robin at Global Vegan Kitchen.