A vegan shepherd’s pie is a wonderful choice as a holiday centerpiece — especially Thanksgiving and Christmas — or as a dish to take to a potluck. To prove the point, our Lentil and Mushroom Shepherd’s Pie is one of our most popular recipes. And though it isn’t at all difficult, judging by how many people have made it and served it, it’s admittedly a bit of a project. For holidays and special occasions, that’s fine — we like to pull out all the stops and put our best foot forward.

But these days, we’d like to cater to the extremely time-crunched (and okay, the very lazy) who’d like to make and share such satisfying dishes, so here’s a brilliant shortcut vegan shepherd’s pie, which cuts out the most time-consuming step — peeling, dicing, cooking, and mashing the traditional potato topping. Instead, we’ll use frozen cauliflower and just whip it up in a food processor or blender. Using lentil soup instead of plain canned lentils adds more flavor.

Another perk is that, much as we love potatoes, this makes for a lightened-up version with a lot of pared-down prep — it’s also oil-free. And of course, if you need it to be gluten-free, use GF breadcrumbs.

2  Lightly oil a large shallow baking dish. Line the bottom with a layer of bread crumbs, about ¼ inch in depth.

3  In a large skillet or stir-fry pan, combine the scallions and mushrooms. Cook over medium heat until they’re both slightly wilted.

4  Add the lightly drained soup and seasoning blend to the pan and bring to a simmer. Sprinkle in the flour, a little at a time, and stir in to blend.

5  Add the spinach, then cover and cook until it’s just wilted down. Season with salt and pepper, then transfer this mixture to the baking dish, spreading it evenly over the bread crumbs.

7  Bake for 30 to 40 minutes, or until the cauliflower topping becomes golden and crusty. Remove from the oven and let stand for 10 minutes or so before cutting in to squares to serve. 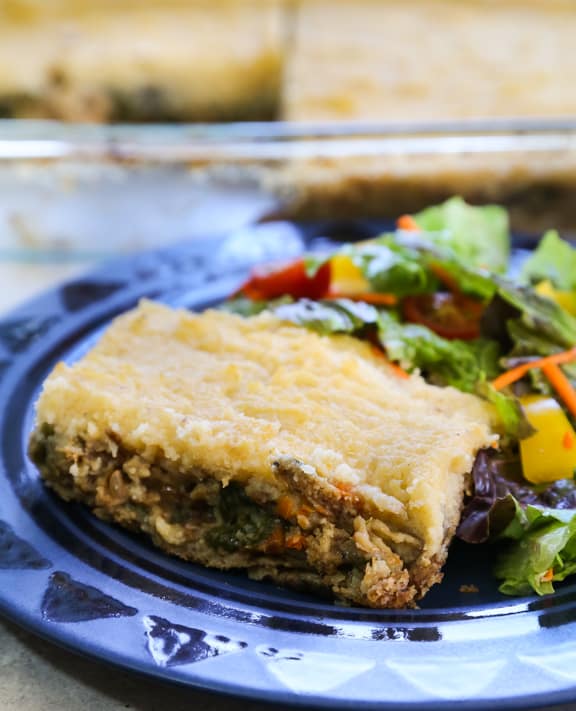