The classic Vietnamese soup Pho Bo soup is made vegan with seitan and vegetable stock. It's filled with invigorating flavors and textures, including rice noodles or bean threads. I love it as a change of pace in the winter from thick soups and stews. It’s still every bit as warming. Despite the length of the ingredient list, this is a quick soup—you’ll be eating in about half an hour. Adapted from Vegan Soups and Hearty Stews for all Seasons by Nava Atlas. Photos by Hannah Kaminsky.

Cook the noodles according to package directions until al dente, then drain and cut into shorter lengths suitable for soup. Set aside until needed.

Meanwhile, heat the oil in a soup pot. Add the garlic and shallots and sauté over medium-low heat until both are golden.

Add the broth, soy sauce, and ginger, Bring to a slow boil, then lower the heat. Cover and simmer gently for 10 minutes.

Add the seitan, bean sprouts, half of the scallions, and half of the cilantro. Season with lime juice, pepper, and if desired, some additional soy sauce.

You'll likely need to add more liquid at this point, so that the ingredients aren't too crowded. If you have more vegetable broth, add an additional 1 to 2 cups, otherwise, just use water.Simmer for 3 minutes longer, then remove from the heat.

Serve at once, garnishing the top of each serving with a thin wedge or two of lime, and the remaining cilantro and scallions.

Note: If you prefer, you can sauté the seitan in a little oil over high heat until it becomes golden and crispy, but straight from the package is fine, too. 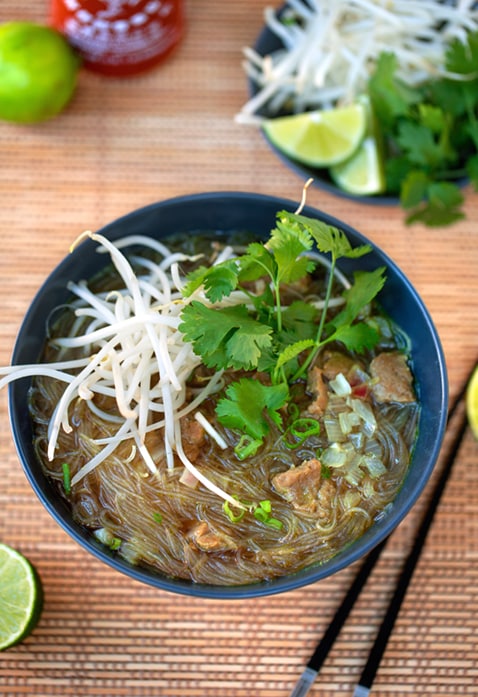 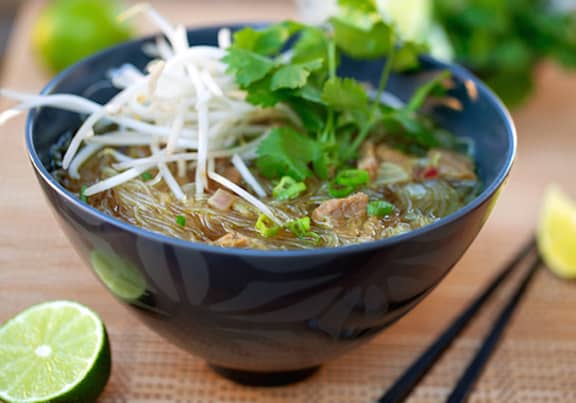 « Miso Soup with Winter Vegetables
How to choose a slow cooker »