Turmeric is often referred to as the queen of spices, as its medicinal powers (healing, antioxidant, cleansing) have long been valued. Its bright yellow hue adds a ray of sunshine to Indian curries, and its warm flavor is beloved by many. I’m not one of them. Its kind of woodsy, odd flavor puts me off, and if I use it at all, it’s quite sparingly. So it came as somewhat of a shock to me how much I loved the samples I received from Tumeric (yes, it’s spelled without the “r”): The Elixir of Life. In fact, I was crazy for the flavor, and soon became hooked.

These elixir beverages have a strong flavor — spicy and bracing. Though the flavor and color of turmeric is front and center, each variety also contains any combination of ginger, cardamom, lemon, cayenne, cinnamon, vanilla, spearmint, and more. Some are in a base of water, others in a base of coconut water. I received a sampling of several 12-ounce bottles and a few 3-ounce bottles of “Pure Prana” which really concentrates all those antioxidant goodies in one small container. 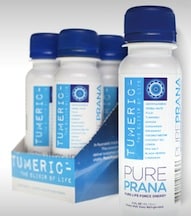 The flavors of these elixirs are strong. Spice fans will love them straight up. I prefer diluting about half a cup of elixir with an equal part of water. Sometimes I add a tablespoonful of apple cider vinegar, just to up the ante a bit more, and a few drops of liquid stevia. A dose of this per day makes me feel invigorated, and I’ve grown to love the flavor as well.

Tumeric elixirs come in a variety of flavors, though they aren’t radically different from one another. You can explore the Original, Vegan, Vegan Coconut Nectar, and Vanilla Bean here. They’re available at selected retail locations as well as at Tumeric’s online store.

The only down side is the price, but if you order in quantity or opt for the larger, 32-ounce bottles, the product becomes more affordable — a 32-ounce bottle is 9.99 when you order three, and if you like it about half a cup at a time like I do, that’s a lot of energy in a bottle. Drop those horrible coffee-based energy drinks and try these instead.  These make me feel clear-headed and raring to go, without any unpleasant caffeine buzz.

Disclaimer: Tumeric Alive sent me free samples to review. I never review products that I don’t like and wouldn’t recommend to VegKitchen readers. I don’t profit from the review of this product (other than my own health and pleasure!).