This potato kugel (which is a baked pudding or a casserole) is reminiscent of my grandmother’s, but I kicked up the nutritional profile a bit with the inclusion of sweet potatoes and taking out the eggs. This version is less rich but still full of potato-y comfort, a cross between hashed browns and scalloped potatoes, and a great side dish at a Passover meal. Being gluten-free, I omitted the traditional matzo meal, but feel free to add that as described if you have no issues with wheat. By the way, a mandolin slicer works great for getting the potatoes into uniform matchsticks. Recipe and photo contributed by Maria Rose from Vegan Street. 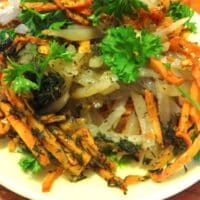