The secret to this creamy, delicious vegan chile relleño quiche is using aquafaba — AKA chickpea liquid. Most poblano chiles are relatively mild, but if you don’t want any heat, substitute 2 large green bell peppers instead. Or, if you like more heat, add a few roasted jalapeños to the mix. Recipe and photos from Aquafaba: Sweet and Savory Vegan Recipes Made Egg-Free with the Magic of Bean Water © 2016 by Zsu Dever. Reprinted by permission of Vegan Heritage Press.

Preheat the oven to 325°F. Combine the cashews and yogurt in a blender and blend until smooth, scraping the sides as needed. If using a standard blender, allow the nuts to hydrate for 10 minutes and blend again until smooth. Set aside.

Roast the poblanos directly over the flame of your burner or roast them in a cast iron pan. Cook until blackened and charred all over.

Transfer the poblanos to a bowl, cover the bowl with a plate, and set aside to steam for 15 minutes. Peel the chiles (do not wash them) and remove the stems and seeds. Chop them into ½-inch cubes and set aside. You should have about 1 ½ cups.

Add the aquafaba and cream of tartar to the bowl of a stand mixer. Using a whisk, vigorously whip the aquafaba for 10 seconds.

Using the balloon whip attachment, whip the aquafaba on medium power for 5 minutes. Increase the speed to medium-high and continue to whip for 11 to 13 minutes, or until it forms stiff peaks.

Add the oil to the meringue in a very slow, steady stream, pouring it down the side of the bowl. This should take about 1 minute. 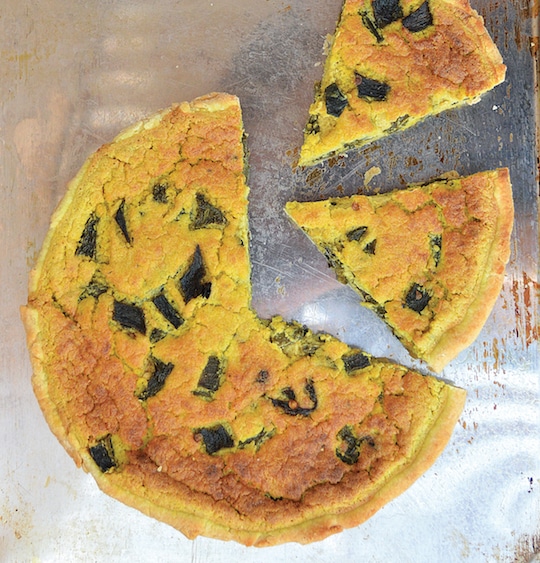 Transfer about one-half of the meringue to the oat mixture and fold with a spatula to incorporate.

Transfer the rest of the meringue to the tempered batter and fold until the batter is well mixed and the meringue is deflated, adding the chopped poblanos toward the end of the folding process.

Pour the batter into the par-baked pie crust and bake for 40 minutes. Increase the heat to 425°F and continue to bake until the top is golden, about 5 minutes. Chill the quiche overnight in the refrigerator to firm up.

Note: Use the organic, low-sodium, canned chickpeas and strain off the liquid into a measuring cup using a fine mesh strainer. Note the amount of liquid you acquired, then add it to a medium saucepan and bring to a boil. Reduce to a simmer and cook until the liquid reduces by ⅓. Cool the aquafaba completely before using.