OVEN “FRIES”: Use one large or two medium potatoes per person (preferably red-skinned, Yukon gold,  or other firm-fleshed variety). Peel the potatoes and cut them into long, ½-inch thick fry-shaped strips. Combine them in a large mixing bowl with a modest amount of light olive oil and toss well to coat. Sprinkle with a little salt. Transfer to a nonstick baking sheet. Bake in a preheated 425º F. oven, stirring gently every 10 minutes, until the potatoes are crisp and lightly browned, about 25 to 30 minutes. Serve at once. Note, this is also an excellent way to serve sweet potatoes.

SAUTÉED SKILLET POTATOES: For 4 servings, use 6 medium potatoes (red-skinned, Yukon gold, or other firm-fleshed variety). Microwave or cook the potatoes in their skins until they can be just pierced. When the potatoes are cool enough to handle (In a hurry? Plunge the potatoes into a bowl of ice water), peel them and cut into thick, wedge-shaped chunks. Heat just enough light olive oil to coat the bottom of a large nonstick skillet or griddle. Cook the potatoes over medium-high heat in a single layer (do this in batches if needed), turning frequently until all sides are golden brown and crisp. If cooking in batches, keep the first batch warm in a covered casserole dish while cooking the second. Sprinkle with salt, pepper, paprika, and/or fresh or dried rosemary, and serve.

A variation on this theme, without having to pre-cook at all is to use small new potatoes. Use about 2 pounds for 4 servings. Wash well and cut in half. Combine in a skillet with water in about ½ inch depth — just enough to keep the bottom of the skillet moist. Cover and steam until done but still firm, then drain off any water. Drizzle in some olive oil, turn the heat up to medium high, and sauté, turning frequently, until golden brown and crisp. Sprinkle with salt, pepper, paprika, and/or fresh or dried rosemary, and serve.

BAKED POTATOES, THE CLASSIC WAY: For those of us who lead hectic lives (and who doesn’t these days?), the microwave is a boon for baking potatoes (as well as sweet potatoes). You can bake them in a fraction of the time it takes in the oven. But if you find yourself home on a cold or drizzly day, consider baking a few potatoes (or sweet potatoes) the old-fashioned way. Their flavor deepens and they bake more evenly in the oven than they do in the microwave.

Preheat the oven to 400º F. Scrub the potatoes (especially well if you plan to eat the skins) with a vegetable brush. Conventional wisdom says to poke a few times with a fork to allow steam to escape, but to be honest, I never do this. Wrap the potatoes in aluminum foil and arrange them on an oven rack. Bake until a knife pierces through easily, about 1 hour. Serve with your favorite toppings, of which you wont need too much — it’s good to enjoy their simple and delicious flavor without much embellishment. A pat of vegan buttery spread (like Earth Balance) and/or Vegan Sour Cream, a little salt and pepper, and you’re all set.

GRAVY-SMOTHERED POTATOES: For each serving, bake (as instructed above) or microwave a large potato (any variety) until tender. Cut in half lengthwise, smash with a large fork, and douse with your favorite gravy. Try this with Easy Mushroom Gravy. 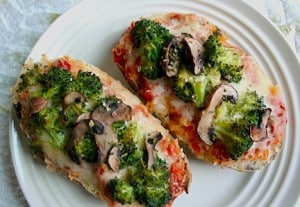 PIZZA POTATOES: Use 1 large baking potato (such as russet) per serving. Bake or microwave until tender. When cool enough to handle, cut each in half lengthwise. Fluff the inside of each potato half with a fork. Spread about 2 tablespoons of pizza sauce on each half, followed by 2 to 3 tablespoons grated mozzarella cheese or nondairy cheese. Bake in a preheated 400-degree oven for 10 minutes, or until the cheese is bubbly. Serve at once. If you’d like, add some steamed veggies to top the pizza potatoes. A large tossed salad (with chickpeas tossed in) or some raw veggies and dip can be a simple, complete meal. For a more specific recipe for veggie-topped pizza potato, see Pizza Potatoes.