Two kinds of barley are available in natural food stores: pearl barley  and pot barley, sometimes called Scotch barley. Unhulled barley is occasionally available, but it is not recommended except for the purposes of sprouting , since it takes a very long time to cook–and to chew. The most familiar form of barley is the pearled variety. Pearling is accomplished by grinding off the tenacious hulls of the grain with the use of abrasive disks called carborundum wheels. Pearl barley goes through five or six pearlings, removing all of the hull, plus most of the bran and germ. To make pot or Scotch barley, the grain goes through three pearlings to remove the most of the hull and some of the bran. It is therefore more nutritious than pearl barley.

Don’t assume that just because you buy it in a natural-food store, the grain you have must be the less refined pot barley; make sure it is labeled as such if that is what you want. Pot barley has a deeper tan color than pale pearl barley.

The protein content of pearl barley is 8 percent, whereas that of pot barley is 9 ½ percent. Pot barley is rice in the B vitamins, particularly niacin and thiamine, and provides good quantities of minerals, particularly potassium, as well as iron, phosphorus, and calcium. Pearl barley loses half of the vitamin and mineral content through the removal of the bran a germ. Much of the good fiber content is lost, too.

Basic Cooked Barley: Use 2 ½ to 3 parts water to 1 part grain for pearl barley, and 3 to 3 ½ parts water for pot or Scotch barley, depending on how firm and chewy you like the texture. Bring the water to a boil, then stir in the barley and return to a boil. Lower the heat and simmer, covered, until the water has been absorbed, about 40 minutes for pearl barley and 50 to 55 minutes for pot barley. 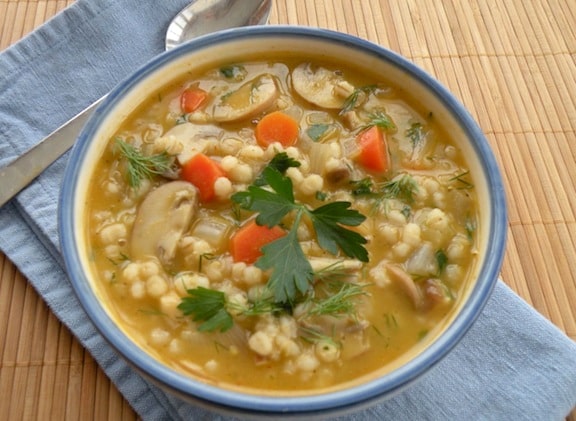 Here are a few of VegKitchen’s barley recipes: