Pumpkin seeds are high in protein and have a unique flavor that makes them especially enticing to eat as a snack, unadorned. When buying pumpkin seeds, you can choose between raw or roasted, shelled or unshelled, salted or unsalted. Roasting brings out their flavor and crunch, and you can easily roast them at home. Roasted pumpkin seeds are often marketed as pepitas.

If you’ll be using them primarily as a snack, but them in the shell. They’re more economical that way, and the extra time it takes to shell them will help limit the number eaten in one sitting. Avoid salted pumpkin seeds, which are usually quite salty, causing their flavor to be masked rather than enhanced. Pumpkin seeds in the shell keep well for several months stored in an airtight container in a cool, dry place. Store shelled pumpkin seeds in the refrigerator if you don’t think they’ll be used up within 2 months.

Pumpkin seeds are 46 percent fat. The proportion of polyunsaturated fat is slightly greater than that of monounsaturated, with only a small percentage of it saturated fat. They are an impressive 29 percent protein. One cup contains 774 calories; one ounce contains 148 calories. Pumpkin seeds are quite high in phosphorous and iron and contain modest amounts of several B vitamins.

Don’t throw away seeds from your fall pumpkins! Rinse them well of the pulp and fibers and spread them on baking sheets or pans to dry for a week or so, stirring them daily. When they are completely dry, bake them at 300 degrees F for 15 to 20 minutes, or until fragrant.

Apart from their preferred use as a snack, pumpkin seeds may be used in many ways that nuts are commonly used. The ideas given below are for toasted shelled seeds:

Here are some of VegKitchen's pumpkin seed recipes: 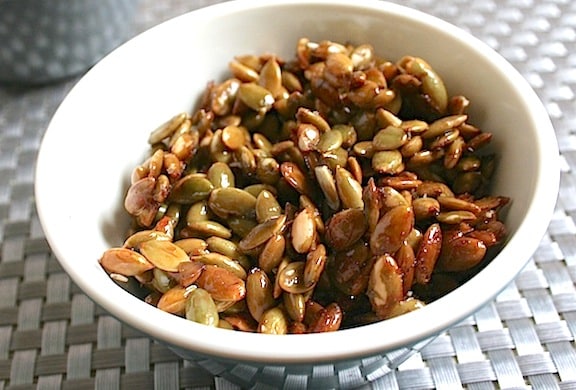