In diner lingo, anything spinach is called “Popeye,” hence the name of these Grilled Portobello Popeye Club Sandwiches. Whip up a batch on your grill for your next family dinner or backyard barbecue.

Serve these tasty sandwiches with a crunchy side salad and maybe even some fries or chips. And don't forget dessert! Serve some chilly ice cream after your sandwiches, or present your guests with a delicious fruit tart.

Full directions for how to make Grilled Portobello Popeye Club Sandwiches are in the printable recipe card below.

Why are they called "club" sandwiches?

Although we often see club sandwiches made with a third slice of bread, they were originally made with two slices. Some people believe the name of the sadwiches came from club cars which date back to the late 1800s.

Can I use other mushrooms besides portobellos?

You can use whatever kind of mushrooms you prefer. Just know that most other mushrooms will be much smaller and or softer, so your sandiwches will likely be less structured than if you were to use portobello mushrooms. 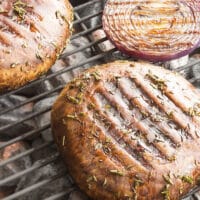